The Souls series by FROM Software has given birth to a genre. One focused on difficulty, interconnected locales, a mix of melee and ranged/spell combat, and little to no hand-holding. Dolmen, the first title from the Brazillian team at Massive Work Studio, is unashamedly following much of the early souls formula to a T. Has this team managed to make a mark for themselves in the Action-RPG landscape, and is it worth your time and money? No, not at all. 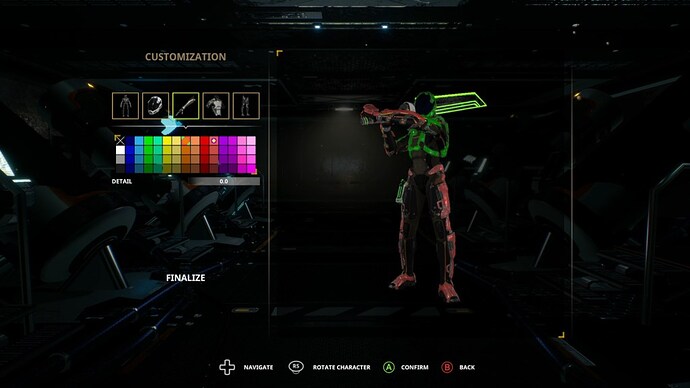 Dolmen takes place in a reality where space travel is in its infancy. One of the few planets humanity has colonized is Revion Prime. An accident has occurred on this planet rich with Dolmen Crystals. These beauties can allow different dimensions to interact with each other. Its your job to figure out what happened, and how to fix things if that is even possible.

Featuring a short CGI trailer opening and then mostly told through audio communications during gameplay the story was interesting at first but quickly devolved into something barely coherent. Trope-filled writing and bored sounding voice acting in the English dub was matched with plot points seemingly pulled out of thin air, and overall it has been a completely forgettable experience lore and story wise.

It is missing the key ingredient that makes the Souls (and Elden Ring especially) so special. The sense of mystery is well earned in those titles through a mix of environmental, boss, and item description methods of being told. The lore comes through written text that pops up on the screen when you activate a station, and the bosses have zero personality to them. Missing the mark of what makes the genre great permeates through every single area of the title, especially the combat. 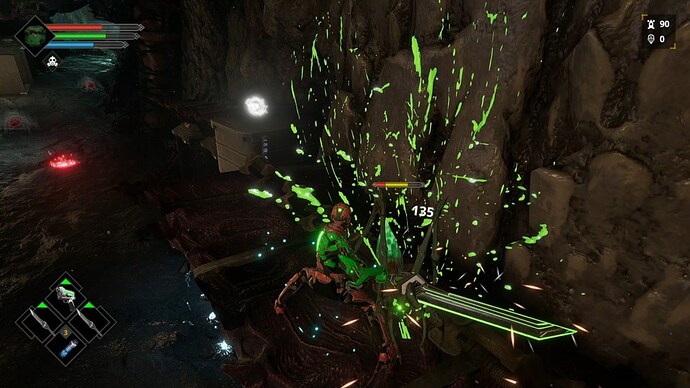 Using the tried-and-true control scheme of the Souls games (mostly), the game ends up feeling like a 360 era knock-off. Button wise A is your interact, X uses Energy to heal, Y activates Energy Mode for some elemental damage melee shenanigans. B is your dodge which uses stamina, right bumper is light attack, right trigger is heavy attack, and left trigger switches to ranged attacks. Left bumper is the quite important parry/block button, and the window for parries is rather generous. Left and right on the d-pad swap between equipped weapons for each hand, up changes your ranged weaponry, and down uses your estus… battery pack. Battery packs are like your mana bar, being used for healing, ranged combat, and your energy mode modifier. Stamina dictates how long you can run, if you can dodge, and if you can attack like one would expect.

Overall the system is fine, but none of it feels very good to use. The controls feel ok in the sixty frames-per-second performance mode, but feel terrible in the ray-tracing enabled thirty fps one. Enemy AI is both easily exploitable and quite often terribly unfair. The difficulty in the game is poorly balanced with few options available for the inevitably forced upon you groups you’ll have to face. If you told me this game was from 2010 and running with fps boost enabled as a back-compat title I would believe it with how the gameplay feels. None of the mechanical depth is here from even the original Demon’s Souls, and the crafting system on offer for loot is thoroughly underwhelming. You will want to match elemental damage and protection types to your current enemies and with 7 overall item sets and a handful of similar feeling melee and ranged weaponry on offer I quickly found a playstyle that felt a bit broken and stuck with it.

Most of the time my progress was halted due to a massive spike in difficulty two options would arise to get passed it. First was going back and grinding previous enemies for a nauseatingly long amount of time. The second option, which occurred frequently, was the enemy AI would break and I could easily kill the foe as they stood there like a statue. The game takes the souls leveling (with six different stats to level up) system and pairs it with a full crafting system instead of having actual items drop that you then upgrade. What is completely broken about this though is that you can’t access ANY of it at the game’s bonfire equivalent. Instead you must constantly go back to your ship and walk around it to access the upgrade bays which kills the flow of the exploration.  Oh yeah, the level design. 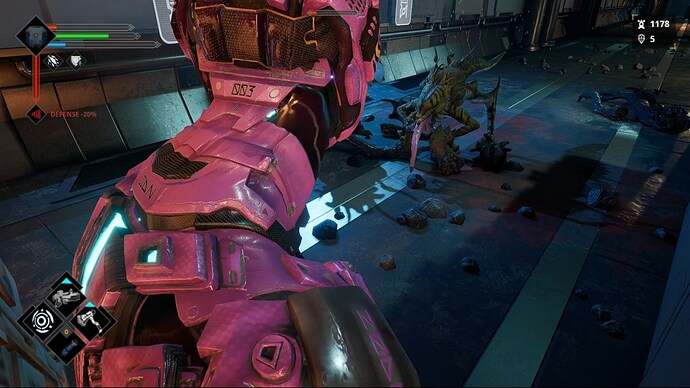 1995 Would Be Proud of these Levels

One of the biggest draws for me to a good Souls-like is its level design and aesthetics. This game fails miserably at both, with level design straight out of the mid 90’s and a boring, dreary, and dull set of levels. Levels interconnect just to do so, it rarely ever actually comes up as something useful, because you can instantly fast travel to any found checkpoint which is where you also respawn. It feels like a puzzle box without a puzzle, and instead after an hour you click interact on a door, are thrown into a longer than it should be load screen, then wait 5 seconds for the textures to load in as you go “oh wow I’m in this area I don’t need to be in ever again, again”.

Early on you’re stuck inside various blocky environments that reuse the same few textures over and over again. Eventually, and not too long after I couldn’t force myself to play any longer, you reach the surface and are met with visuals straight out of a bad Gears of War clone. Not Gears 5, that would be gorgeous, I mean areas that look straight out of the Xbox 360 original. Getting back to that checkpoint system. It is the bonfire equivalent as in you lose every nanite (aka “soul” that you have along with any current dolmen fragments (more on those in a bit). After dying you’ll respawn at the last used checkpoint and have to run back to your corpse to get your lost loot, of which you only get one try.

The issue here is often checkpoints are hidden out of the way, and not cleverly so that you’d think to look for them. Quite often I had to run around an area for 20 or 30 minutes before I finally found one, teleport back to the ship to upgrade, then teleport back. One boss run was a solid two and a half minutes from the nearest checkpoint, without a single enemy in-between that I had to fight. There is no reason for this other than poor planning, at least none that makes sense to me. Why make the player run for over two minutes every single time they die on what was an incredibly cheap and difficult boss with multiple one-hit mechanics? Gah!

A cheap and overly used mechanic is enemies falling on you from the ceiling, often in multiples of two or three. Either as a glass cannon or tank build your character will feel like they’re a toddler fighting a bull when grouped up on. Few, nay zero tools are at your disposal for dealing easily with multiple enemies at once, and they can stunlock you constantly into taking multiple hits for no good reason. Doing this combat while dealing with the boxy, jagged level-design drove me crazy. 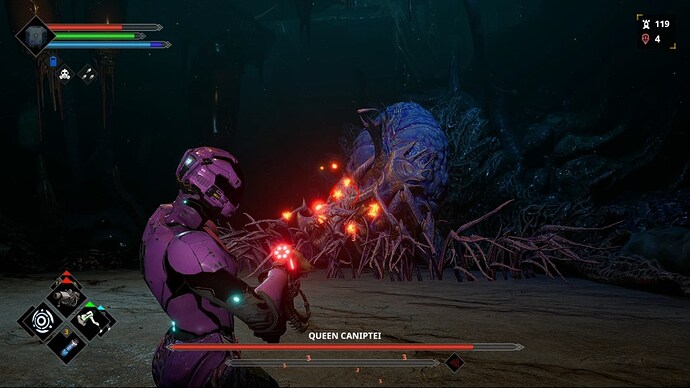 The game has a solid soundtrack. I quite liked the opening screen theme and most of the boss music. It rarely plays outside of those two areas though, and is quite a barren audioscape overall. Sound effects in the game are not properly faded out either. Whenever you do anything the audio file just abruptly cuts out most of the time. There is no natural fade to the sound, I hope this is something fixed for the full launch but it stood out big time during the review period. Attacking a wall with my axe and hearing a KACHIN….. cut out with no fade and before it had fully played the expected sound oddly put my teeth on edge.

I ran into a few falling through the world bugs early on but after the initial area and a restart of the game it never happened again. What did happen, a lot, was the aforementioned AI breaking and enemies simply standing there as I wailed away on them. I do hope this is something remedied with the day one patch, but I won’t be sure until it hits.

Another major miss is the multiplayer co-op system. Using a currency that you lose upon death and have to recover, and which is also a random drop, you can only call in help at bosses. That is it, there is no invite a friend and play co-op, it’s use this random drop to call in help or go help someone else seemingly at random as well. The system was not turned on until a few days before launch, and was so limited that it felt pointless. You have to be at the boss to activate the call-in/travel-out system and is yet another missed opportunity to make the game actually fun. 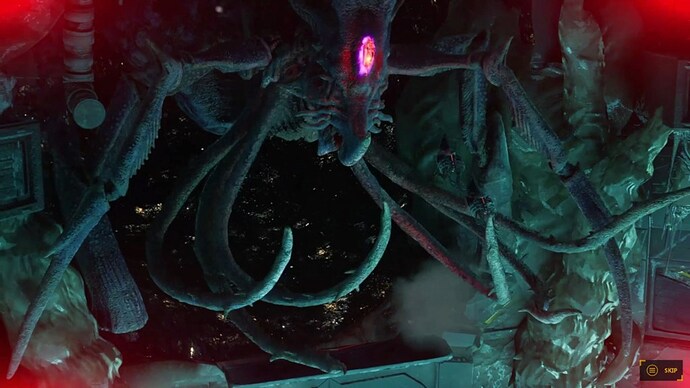 Dolmen wants to put its mark in the Action RPG genre with a potentially intriguing Space/Horror tale that never really goes to space, and isn’t at all scary. It never feels good to play, broke on me constantly, and was an ugly maze of bland/blocky corridors. Retailing for $39.99 at launch I can’t in good conscious recommend this over almost any other game in the genre, though if you want something fun in connection with this game look up what Dolmen means in Swedish Slang.

First time devs, so I feel bad being so negative but the game is just not fun, at all.

First time devs, so I feel bad being so negative but the game is just not fun, at all.

From a swedish review: Not as fun as it sounds…

From a swedish review: Not as fun as it sounds…

Another one: Dolmen is too short…