Cursed to Golf is a 2D roguelike undead golfing title where you find yourself working through Golf Purgatory to try and return to the land of the living. It mixes in a card-based special move system and some devilishly smart gameplay mechanics to become a damned fun game. Well done pixel art is paired with a fantastic soundtrack. This game is a pleasant surprise in what has been a rather packed summer schedule, so let’s break down why it may be worth your hard-earned cash. 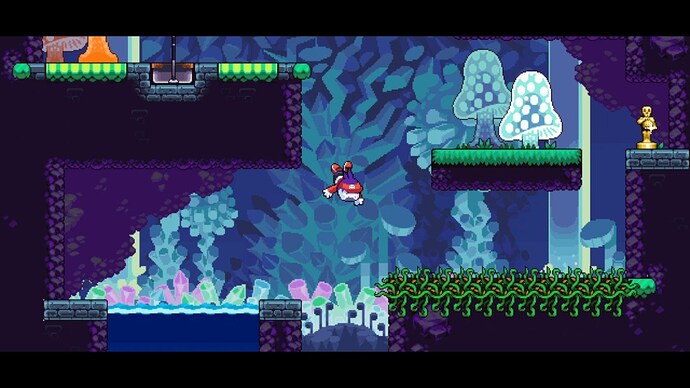 Cursed to Golf is the latest from Chuhai Labs. You are on the 18th hole at the golf championships and about to win in dominating fashion. As you start up your last swing a bolt of lightning goes straight down your club and into you, murdering you instantly. You awake in Golf Purgatory and meet the first of four ghostly caddies who will assist you in your attempts to escape. To get out and defeat the wicked Greenskeeper you’ll need to make your way through 18 holes across four distinct biomes. Every hole has a shot counter that ticks down after each swing, hit 0 and your now cursed form is sent back to the beginning to start it all over again. It’s a golf roguelike, in a fashion, and it works well!

The entire game is set on a 2D plane and you have three clubs at your disposal. First is the driver which can hit things high and far, then the iron which is lower and mid-range, and then the wedge which can aim up and short range. The swing mechanic is a basic one to start with but can become incredibly powerful as you unlock a few of the game’s core abilities in the tutorial. A press of the A button will start a power meter that quickly moves up and down and is easy to get it where you want. Next is the height meter which shows an arc of your ball’s travel to indicate where you’re aiming. You can use the B button to scout around the course and figure out your next move as these courses are not flat. They quickly become puzzle platformers where you need to figure out how and where you need to go to reach a hole. Water and spike hazards will cost you a shot, while bumpers allow you to aim where the ball goes after hitting them and can lead to some truly dazzling trick shots.  It’s the type of thing you need to see for yourself because it’s inventive and unique in all the right ways.

Aiding you in this is the ability to control the spin of the ball in whichever direction you want by pressing A to make it spin and then holding left or right depending on what type of English (spin) you want to put on it. The biggest weapon in your repertoire though are the Ace Cards. There are dozens of them and they are incredibly powerful. From adding more shots to your meter to letting you stop the ball mid-air to drop it on a perilous platform, blowing up the blocks of TNT in the area, or even reversing course in mid-air so that you can take tight corners, these cards are key to surviving each hole. The main run-based element of the game is finding either cash to buy more cards at the shops along the way or finding packs themselves in the very basic left or right choice that’s afforded to you as you progress from hole to hole. There is a binder at the shop which allows you to save cards which I slowly filled over time to help push further and further. The last main mechanic of the game are the idols found on each level, these mainly offer up extra shots on your counter though on boss levels they can also stun your opponent. Hitting them is key to making it through any hole. 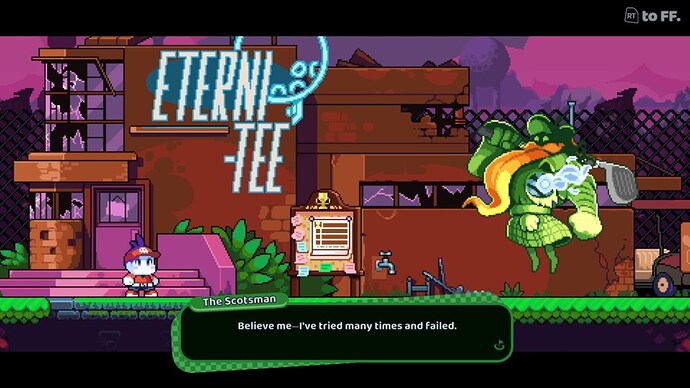 What Makes It A Roguelike

The “roguelike” part of the game is the fact that you must complete 18 holes over 4 different settings, but there are over 70 different holes that will be randomly mixed in at the start of each run. You’re never quite sure what is coming next and some of them are both incredibly long and stupendously difficult. There is one mechanic that lets you, once per run, set a hole as your “return” which gives you a second chance after failing. Instead of starting from the beginning, you can quickly make it back to whichever hole you set the comeback flag and try again. You only get to do this once per run though, so be wise on where you set it. The other “cursed” part of the game are the cursed holes you can choose to take on. These offer up an array of negative status effects like being forced upside down or having it rain so that the ball no longer travels after hitting the ground. Each curse will effect a certain number of shots but the path through those holes can offer up excellent per-run rewards.

Graphically the game looks nice with a now very familiar pixel-based aesthetic. It’s bright, colorful, cheery, and really well animated. Each course type looks unique and features various hazards and shortcuts. One of my favorite areas of the game though is the music. It’s really well done and extremely catchy. It hits that nostalgia part of my brain, sounding like old golf arcade games but modernized in the right way. The game has no voice acting to speak of though there are 16-bit style sound effects used for when the caddies talk. The writing is charming and brings a ton of character to what otherwise could be a rather dreary story setup. You’re all stuck in purgatory, forced to golf forever to try and leave but it stays light-hearted and goofy in a way I dug.

I ran into a few bugs but only one of them forced me to restart a hole and they were all listed in the “known issues” list I was given. Hopefully, they have tightened things up a bit with a launch patch but make sure to check things out online to see how people are experiencing things. I did review it on Xbox Series X and while it didn’t have a ton of options the resolution was high and the framerate was consistent which is the most I could ask for out of this type of title. 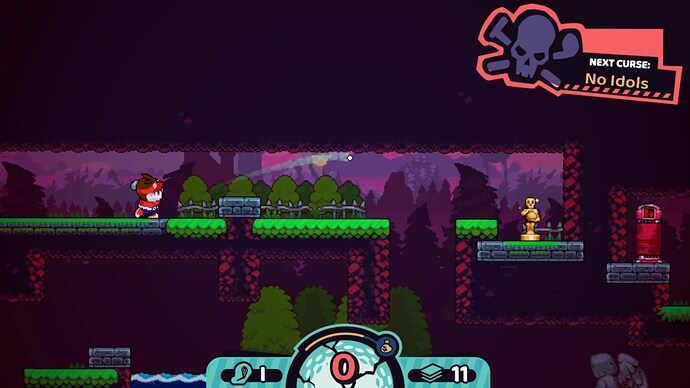 Cursed to Golf is charming, smart, sounds and plays great, and is full of heart. It mashes up a side-scrolling arcade golf game with roguelike mechanics in a fresh and exciting way. At only $20 US at launch, I think it’s well worth a purchase if anything you’ve seen here has you intrigued. This is one curse that’s well worth the cost.

Not very interesting game to me, but would probably try if it came to Game Pass.