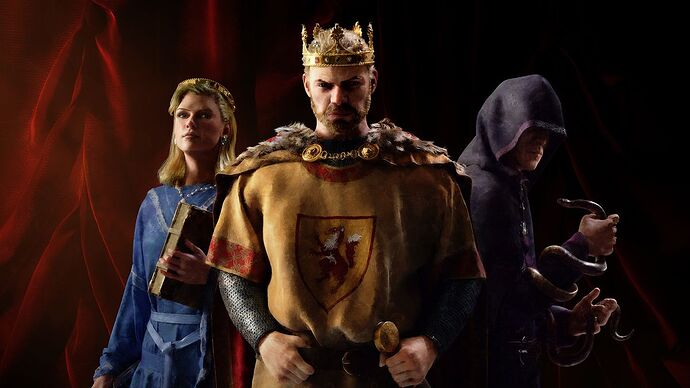 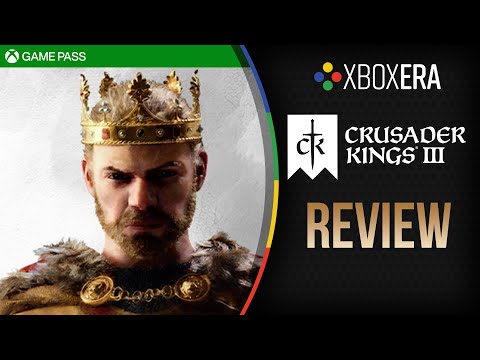 Released on PC to massive critical acclaim back in late 2020, Crusader Kings III is now available on series consoles. Much like its PC brethren, the title is available day one on Game Pass, and boy is it something. This is not a game for the casual crowd. It is one of the densest, most difficult to manage, tough as nails (by default at least), and satisfying primarily text-based sim games I have ever played. Read along and find out if this weird and wonderful title is for you. Make sure you have your reading glasses

First things first, this game is 99.9% text-based. There are 3D models of the characters present but they are simply window dressing for the heart of this title. You can choose one of the dozens of ruling families and lead your initial character and their dynasty through hundreds of years of medieval turmoil. If you want to succeed on the normal difficulties (and even the easier ones) you will need to stay on top of the flow of time. You can have it run quite slow to incredibly fast with days flying by in seconds. I found myself having to stop time completely often to keep up with all my courtly duties. This is very much a game built for mouse and keyboard and the team has done a solid job here moving things over to controllers. It’s not perfect and can be a lot to remember but it works well overall. I did spend some time with the PC version of this game to compare things and it is noticeably faster there.

The heart of the game is balancing your personal and public life as ruler. Where you rule, how you rule, what your true goals are? All up to you in the end. This is an extremely open-ended, systems-heavy game. Do you want to be fair or a tyrant? Loved or hated? A conqueror or defender? You choose and react accordingly to how your neighbors go. Accidentally slighted a fellow king? Well, now you can look forward to the possibility of decades of never-ending, brutal, and expensive war. Keeping the books balanced is basic overall but one of the most important tasks as you attempt to grow your army and build up the country/territory that you rule. Say a long war is causing you to tax the people non-stop, expect a peasant revolt. Need some extra cash and have a few wealthy criminals in prison? Ransom them off! There are so many constant choices that need to be made in the incredibly large number of systems that it would take a hundred thousand words to describe it all.

The game does just that in its unbelievably exhausting Encyclopedia section. I’m a bit of an idiot so I found something to hold down on my right stick in the menu and sat there twiddling my thumbs as the game scrolled through every page available. It took nearly half an hour to get through it all. I cannot overstate how mechanically dense this game is, and you must be prepared to read and learn a lot if you want to get the most out of it. A main pillar of the game is your familial lineage. The ruler you start out as only has so long to live, whether it’s a knife in the back, plague, or simply getting old that does them in. You’ll be tasked with finding someone to marry and sire heirs with. This system itself varies wildly depending on the region you choose to play in. Each religion/region/time can change things up in massive ways. My first playthrough was in a Scandinavian country where I could have a wife and three concubines. The next time I was in Ireland and cheating on my spouse was a cardinal sin. The areas available range from Iceland straight down to the Northern Part of Africa, all the way to the edge of China and up through Russia and all of Europe. There is an incredible variety to how things can play out with a huge number of rulers to choose from in three different time periods as well.

Ruling through 10 years when trying my hardest took me 10+ hours of gameplay, and even then, I still missed things repeatedly like making sure my council was always full, my friends were happy with me, vassals felt placated and so much more. To ally with a much larger country (thereby gaining access to their army at times of war) I married my 6-year-old daughter off to an 80-year-old King. It felt horrible but it wasn’t that wildly inaccurate historically. The “most suitable” match for my ruler was his 1st cousin, and the game happily listed all the negative traits that could happen to their offspring. My 2nd queen (the first one died of the plague) was 13 when my ruler was in his mid-30s. A few years later my uncle attempted to kill me because I hadn’t given him a piece of land he wanted. There is no other game like this, and it’s both incredible and utterly exhausting with what you must keep up with. Not a showcase graphically but it gets the job done

The game looks as good as you could hope for, given the genre. The maps are well-drawn, the text/font choice is top-notch, and the 3D models you see at times look good for just how many of them there need to be. The music is great when it hits, and I ran into no major bugs while playing. Load times are appropriately fast as well and jumping in and out of various save files was a breeze.

You will need to spend time with the controls to get things down, but once you do flying through the menus is easy. I was unable to find much in the way multiplayer-wise on console during the review period but if it is anything like the PC launch there will be a never-ending amount of people to play with and it can be quite fun/hectic. One oddity I found is that DVR clips of the game recorded at 50fps in the Xbox DVR app. Crusader Kings III is a phenomenal game that is not for most. If you have the patience, reading ability, and time this is one of the best, funniest, and most varied sim games on the market. Being a part of Game Pass makes it easy to recommend and if you always wanted to marry your cousin, stab your uncle king in the back, or tax the people into open revolt then this is the game for you.

I have CK2 for PC but never spent much time with it. And I don’t have a PC anymore either so it just sits in my Steam account collecting dust.

If I can move on from my Elden Ring obsession, I’m interested in giving this a shot.

You mention it’s a dense game but is it like “2nd job dense” or “you’ll have fun if you make this your primary game dense”? Thanks for the review!

I have CK2 for PC but never spent much time with it. And I don’t have a PC anymore either so it just sits in my Steam account collecting dust.

If I can move on from my Elden Ring obsession, I’m interested in giving this a shot.

You mention it’s a dense game but is it like “2nd job dense” or “you’ll have fun if you make this your primary game dense”? Thanks for the review!

You’re always in control of the flow of time so it’s as demanding/or not as you want.

You’re always in control of the flow of time so it’s as demanding/or not as you want.

I second this. These games are actually chill out games for me and hours can go by without you realising.

Nice review! I love Paradox games and they are the only reason I still game on a PC occasionally, will be very interesting to play this on console!

If Hearts of Iron, Europa Universalis and Victoria makes its way to Xbox consoles I will sell my PC haha.

Nice review! I love Paradox games and they are the only reason I still game on a PC occasionally, will be very interesting to play this on console!

If Hearts of Iron, Europa Universalis and Victoria makes its way to Xbox consoles I will sell my PC haha.

I think Victoria has a very good chance of coming all but later, as it is no more complex than Stellaris and CK3. Plus you know Xbox will give Paradox that sweet, sweet Game Pass money whereby the port virtually pays itself I would imagine.