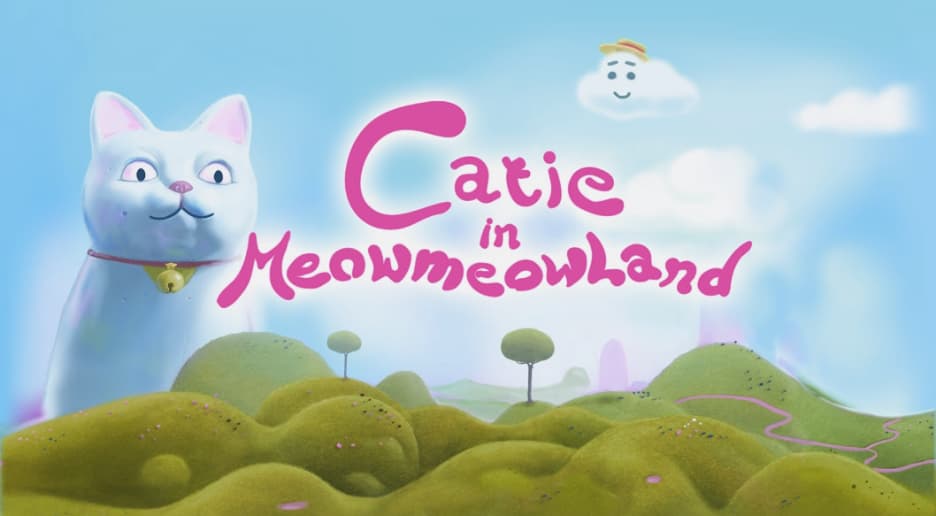 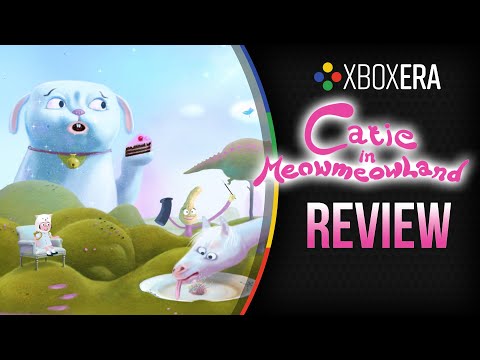 I’m going to start off by saying—Catie in MeowmeowLand is weird, and if you’re here, you probably already knew that.  So let’s get right into it! 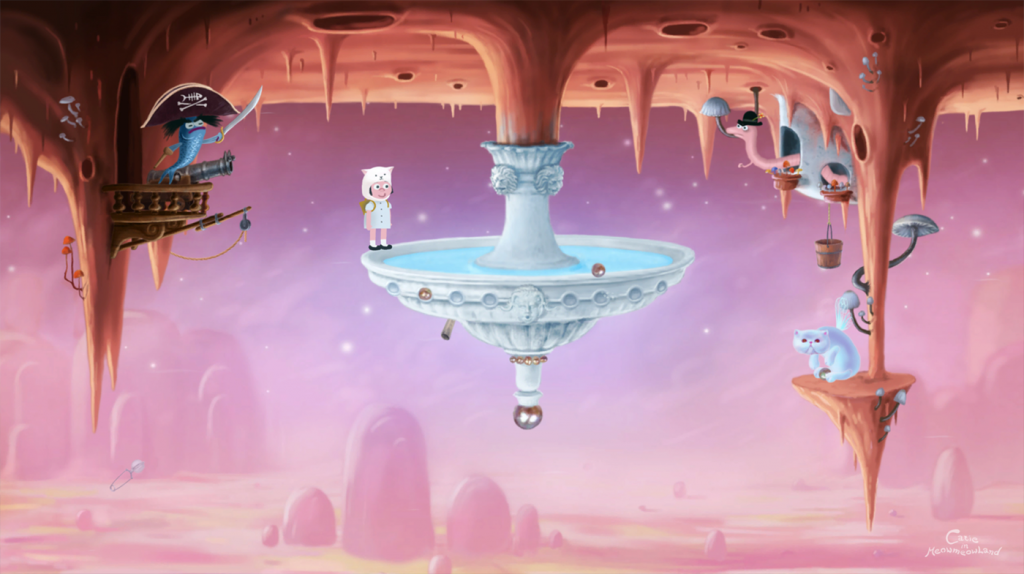 A couple of weeks ago, Xbox Era was passing out video games for review and someone says “who wants to play a game about a girl, cats, and rainbows?”  And I said “Me!”  I didn’t know anything about the game when I dove into Catie in MeowmeowLand.  All I had seen was the game thumbnail on the Xbox home screen.  It seemed so obviously for me, in theory, but I really did not know what I would be getting myself into.

On their website, developer ARTillery explains that Catie is a point-and-click adventure game set in a bizarre world of cats.  And via an Alice and Wonderland narrative, Catie falls down a rabbit hole after she chases a mysterious white cat through her garden.  Then you must help Catie find her way back home through MeowmeowLand as she runs into obstacles, weird scenarios, and strange characters along the way. 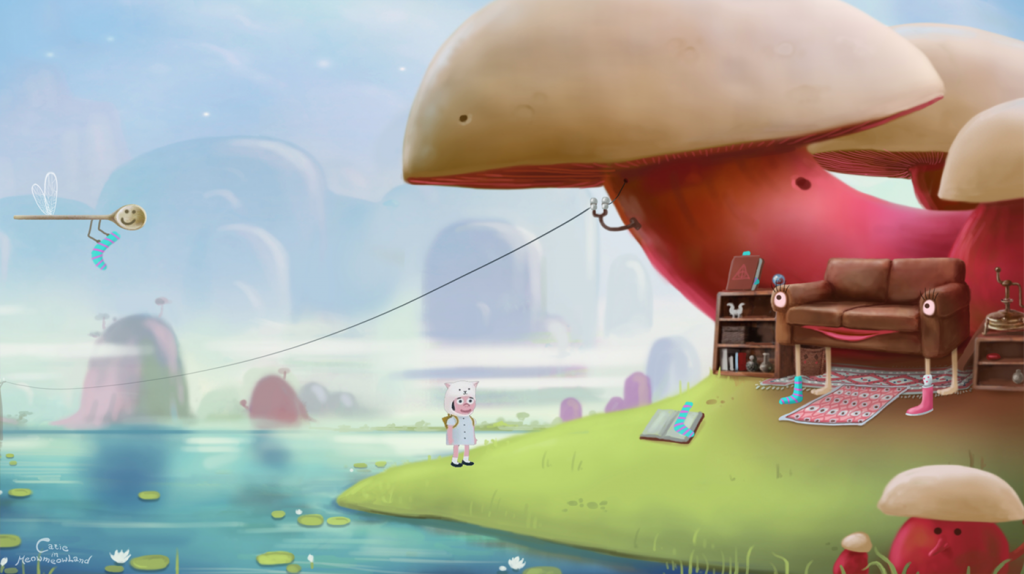 You basically know what you’re getting yourself into when a game begins with a hairy leg emerging from a hole, kicking you down another hole, and then delicately points its toes as it slides back down.  When you land, you bounce into a cat’s mouth.  I immediately thought “is this cat going to poo me out? No, that ridiculous”—as Catie promptly slides from the cat’s pink butthole amid a puff of green miasma.

The graphics are reminiscent of children’s book illustrations, and I had a strong Peppa Pig vibe from Catie herself.  It appears one cannot escape Peppa Pig even as a parent of teenagers…  The characters and scenes are surreal and have I mentioned bizarre yet?  There’s really no other way to describe this game.  Until you have flown with Catie through MeowmeowLand landscapes with an astronaut cat on a surfboard, looking at animals and landscapes that remind you of a Salvador Dali Jr. for kids, you do not entirely understand.  Until you feed magical furballs to Catie and characters to transform them into dinosaurs or long unicorns and give them special abilities, you do not understand.

The quirkiness of this game is that the puzzles rarely make sense.  Like why would clicking on a pirate for the second time cause a fight with a worm, throwing shells and fish at each other, and then the pirate blowing a hole in the wall that gives you the last sparkly ball to decorate a fountain? 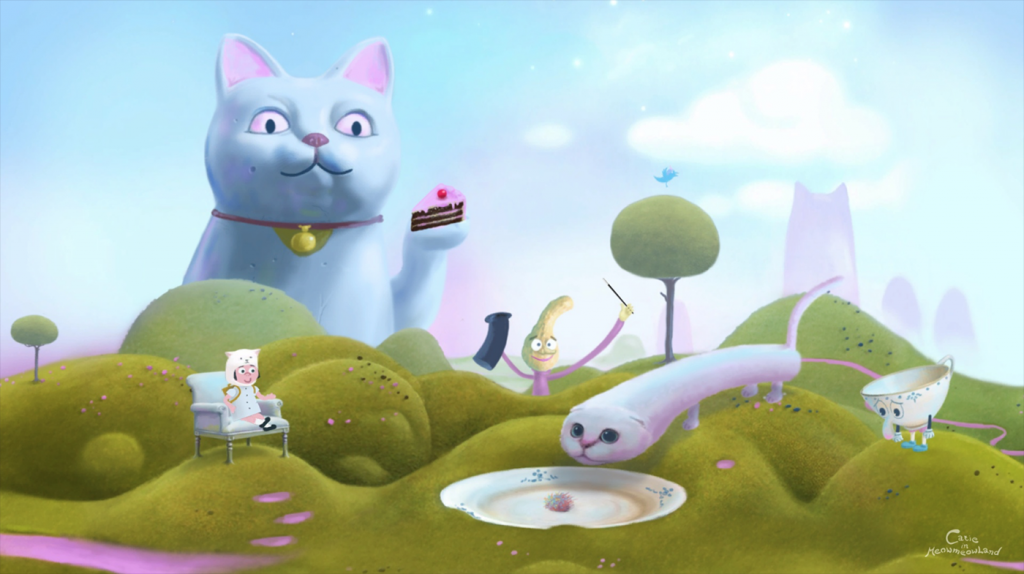 It feels that the further you progress, the more obscure most of the puzzles get.  I admittedly spent a lot of time frustrated because I couldn’t possibly see what the goal was until I clicked on some small tree in the background, or finally thought to click on Catie herself (that one was the most annoying—make sure to click on Catie to see if a scene is finished, by the way…).  You will often find yourself wondering why the hell are these tiny broccolis in the background clickable objects? And sometimes they just plain mean nothing, sometimes there are holes and mushrooms that poof out spores and you’re wondering why this is in a (seemingly) child’s game?

Once you get past the first few levels, there are absolutely no hints.  You either click on the right things in the right order or you’re screwed.  However, I never ran into a level where I absolutely had to reset the scene, even if you don’t do everything correctly on the first 20 tries, you never have to actually reset because something didn’t happen in the right order.

There seems to be maybe 1 or 2 things that make sense but everything else is completely arbitrary. An extremely annoying aspect of this game is that sometimes you might have to click on an element more than one time to get it to react the way it’s supposed to. As in, they do things when you click them, but they won’t do what they’re supposed to do until you click them multiple times. The gameplay overall is extremely simple, just point and click. However, it’s not always easy to grab what you want, and it does get repetitive to keep going across the screen to grab the reset item.

The sound profile is—I fully admit—super cute and never gets annoying, even though everyone is basically speaking in Simlish besides Catie’s various expressions consisting of “mmm”, “ohh”, “ooo”, “wow”, and “meowmeow”.  The sounds while performing interactions were satisfying and there were plenty of extra weird noises to tickle your earholes!  And I swear there is a boulder you see at the beginning of the game that is inspired by Dwayne “The Rock” Johnson’s head.  Just his head. 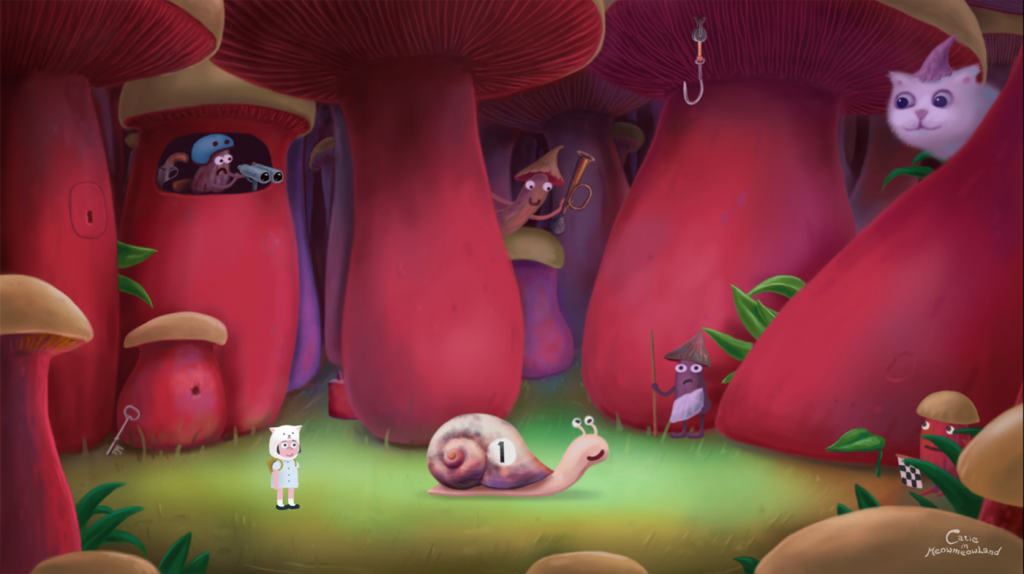 Surprisingly, there weren’t any bugs that I experienced.  I do admit that I was waiting for a scene to bug out—because maybe that would explain why some of the puzzles were just not working when it’s hard to admit that a children’s game is stumping you.  However, I never experienced a scene completely break or anything becoming bugged.

I found the lack of hints a shocking choice.  Even if the developer could add the option for a hint once you’ve been on the screen for, say, an hour or more, which sometimes I was.  After the first few levels, there are no hints at all except sometimes the characters will have a thought bubble with what they want and you can get an idea of what your end goal is, even if the scene itself isn’t obvious in how to achieve that goal. 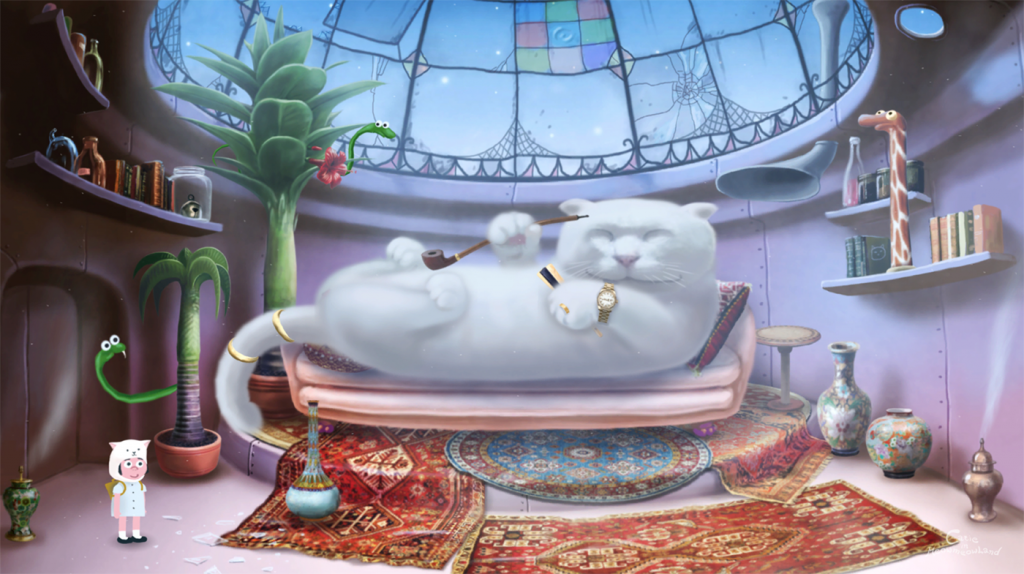 Catie in MeowmeowLand is extremely niche: unless you are a child, a parent playing with a child, or you simply like really weird and bizarre things.  I think this is a game best played with family and/or friends so everyone can help you figure out the puzzles.  As I was playing (and getting frustrated), my partner and my daughter joined in to help and we flew through quite a few scenes together.  It’s also more fun to experience all the bizarre scenes with other people around to laugh with you.

After all, what would a MeowmeowLand be without the people you love there to experience it with you?

Gonna give this a read in a bit but for now, the rating isn’t showing up in your post. It’s 6.5/10 if anybody is curious and this is an unintentional error.

Gonna give this a read in a bit but for now, the rating isn’t showing up in your post. It’s 6.5/10 if anybody is curious and this is an unintentional error.

Gotcha, wanted to make sure it wasn’t intentional and I wasn’t accidentally tanking needed traffic.

Gotcha, wanted to make sure it wasn’t intentional and I wasn’t accidentally tanking needed traffic.

Eh it’s fine, the YouTube traffic matters more than our direct site does.

You should make Jesse stream this

This really cheered me up to watch.

Yes, but it’s such a long word that I can’t be blamed!