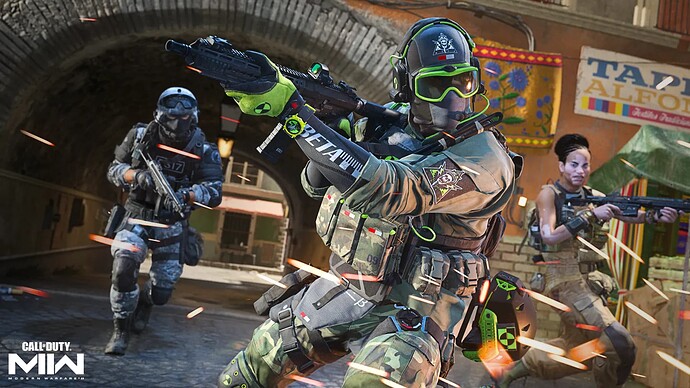 Our Jon reviewed the explosive campaign for it, while I had the task to test out the multiplayer in its launch weeks, as we wait for the next batch of content in the form of Season 1 bringing us Warzone and DMZ among other things. So, let’s not waste any time: how’s Call of Duty: Modern Warfare II’s multiplayer? Does it improve on the exciting but slightly undercooked ideas of the last Modern Warfare? Does it fall into the same pitfalls as Vanguard? Find out in our review! 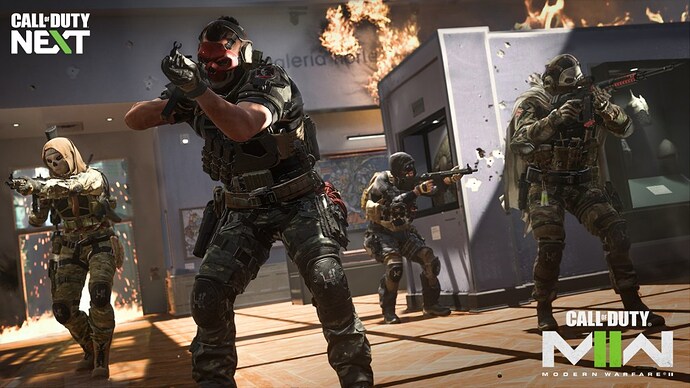 So where were we?

As you may know, this year’s Call of Duty is headed by Infinity Ward, who were the main studio behind 2019’s Modern Warfare as well. I don’t say they were the studio behind the games, because nowadays Treyarch, Raven, Sledgehammer, Beenox and so on all seem to contribute to each installment in some way. This being a numbered sequel, predictably enough, the game feels very close to 2019’s soft reboot of the Modern Warfare series. That game brought a revamped movement system, added nice little features like being able to mount a weapon to a cover or opening a door slowly while aiming in with the weapon, while also changing some of the paradigms of the Call of Duty formula that has became a bit of a paradigm from 2012’s Black Ops 2 onwards.

All this is naturally back, so players of that game and the millions that log into the free-to-play battle royale Warzone will immediately feel at home in the new locales here. There’s a few changes though, such as a revamped sliding mechanic, but all in all the general mechanics feel very similar as ever. The same goes for the gunplay, but like with the movement, it’s hardly a criticism at all: in terms of the actual feeling of gripping the weapon and shooting it, there’s not much better on the market than what Call of Duty offers every year, and the revamp in 2019 helped making the formula even more fresh and smooth, partly thanks to other features like 120hz modes and an FOV slider – but we’ll talk about the technical aspect later. 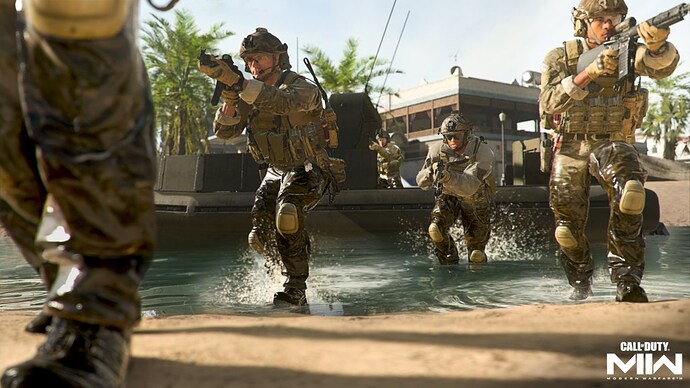 Where we droppin’? Certainly not in Warzone for now…

It wouldn’t be Call of Duty without the barrage of classic game modes. While we wait for Warzone and DMZ, there’s the usual selection of team deathmatch, free for all, domination, search and destroy and so on, with 6v6 matches across the game’s maps that go down in a rather familiar fashion after a decade and a half of this sort of Call of Duty. There’s a few new arrivals like Prisoner Rescue, which is a mixture of classic S&D with a hint of Counter-Strike as hostages now can be saved as opposed to planting bombs, but generally the experience is rather old school. Notably, the Hardcore modes are missing at the time of this writing.

The big maps are back as well, with up to 64 players online duking it out in areas that feel closer to what we normally see in Battlefield rather than in Call of Duty. Ground War is the true classic, as it’s basically a giant match of Domination with the inclusion of vehicles and, of course, killstreaks. Yet perhaps the most intriguing mode, out of the big map ones, has to be Invasion, which is basically a conquest mode where one team, alongside nameless AI cannon fodder as well, tries to make progress on an everchanging battlefield from one set of objectives to another. Between 20v20 players, tons of AIs, vehicles and reinforcements constantly airlifted, the levels of chaos and destruction here are truly impressive.

These maps feel rather natural in their design, with roads, buildings and vehicles that are placed in a believeable fashion, without apparently too much thought that went into their actual balance. Makes for a realistic landscape I suppose, but also creates multiple areas where a few advantageous “camping spots” are practically impenetrable coming from the other side. This issue is there in the classic 6v6 maps as well, though not as grave of a problem as it was in the last Modern Warfare. A fairly natural design for most maps makes them varied enough, but also seem to create some unbalanced matches from time to time. Still, there are multiple maps that more or less follow the classic 3-lane formula, which is proven to be the most effective solution for balance. 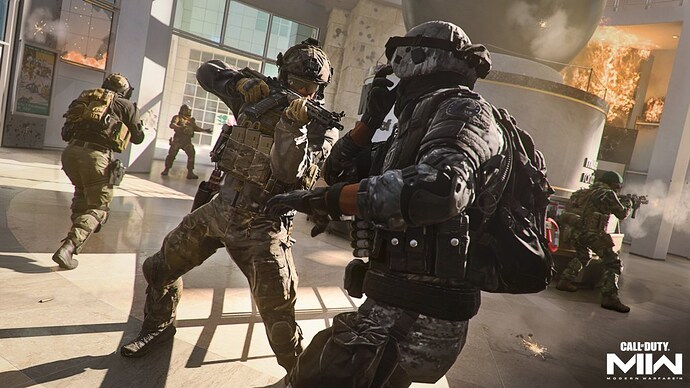 It naturally wouldn’t be Call of Duty without customizable classes, killstreaks and more. The classic system is back, with specific slots for weapons, secondaries, grenades and more – no Pick 10 in sight, in short. There’s an interesting new system for perks where some of the stronger ones, such as Ghost, are only activated towards the second half of the match, though their turning on can be accelerated by playing well: scoring assists, kills, reviving teammates when it’s possible, capturing objectives, using support killstreaks like UAVs, and so on. It helps against some of the most overpowered perk combos for sure, as these may not be readily available until a couple minutes into the match.

Just like in the last three installments in the franchise, every weapon can be customized to ridiculous levels – not just in the looks, with skins and stickers to boot, but most importantly in the functionality. Every weapon has dozens of differents attachments from extended mags to all kinds of scopes, but this year the player can also unlock weapon variants with brand new statistics and characteristics on each. And it doesn’t even end there: it’s possible to use a “tuning” system for the weapon even, allowing the player to manually touch sliders to finetune the weapon spread, the pushback and more. It’s a pretty in-depth system which, predictably, is also creating a handful of ridiculously overpowered builds, and those who don’t abuse the hell out of this system are definitely feeling a disadvantage already.

So do all these changes work? More or less, they do. It’s quite minor tweaks to a working formula, but there’s improvements to the movement system, to the map design, to the general gunplay and gun customization and more. The game’s UI and matchmaking is having a few annoying bugs in these launch weeks, ranging from crashes and some oddities like killstreaks that stop working for no reason, but I find this launch better than the last two the franchise had, even though some things are missing. These include some standard features like Hardcore playlists, player statistics, but on the flipside a lot of less than obvious features made it in, such as matches against bots, crossplay against all platforms and custom FOV. Sure, these were a part of the last few Call of Duty games already, but they’re not quite an industry standard yet. 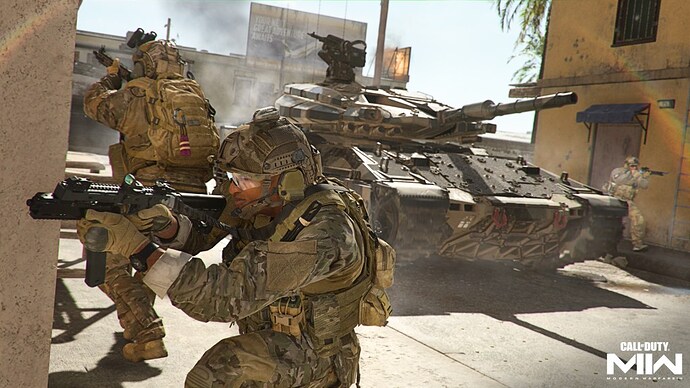 What about Warzone and the rest?

You may wonder what happened to Warzone and DMZ – well, they’re arriving with Season 1, starting on the 16th of November 2022. This will finally bring the first Season Pass, the microtransactions (yay?), and most importantly the also standalone F2P battle royale Warzone and the Escape from Tarkov-inspired extraction mode DMZ. We’ll see in the upcoming days and weeks how these work, but the previews seem quite promising to be frank. The game does ship with three Spec Ops missions, which are basically like co-op renditions of classic campaign situations such as assaulting a desert base or defending an extraction site against hordes of AI enemies, against which the players can usually take a fully free approach. Stealth or full-on assault, it’s all in the players’ hands. This mode offers nothing particularly new for the series, and with only 3 maps it’s a short-lived fun – though, in order to unlock everything, those 3 maps have to be played a lot week after week. I doubt I’ll replay them more than a few times.

So that’s about it, eh? Call of Duty Modern Warfare II doesn’t try to reinvent the wheel at all, proposing a more refined and varied version of the Call of Duty experience Infinity Ward know how to make. All the movement and gunplay improvements of 2019’s reboot are back with further improvements, there’s a bigger than ever weapon variety, plus various tweaks to the map designs, the perk system and general flow of the matches that make it a generally more pleasant experience. Spec Ops is fun a bit uninspired and short-lived, but most notably a lot of things are missing. Much of that is arriving with Season 1 on November 16th, but a lot of modes’ future is not entirely clear. Either way, the latest Modern Warfare is the most fun and exciting the series has been in a few years now, which helps closing an eye on the fact it doesn’t try too hard to change the formula at all. 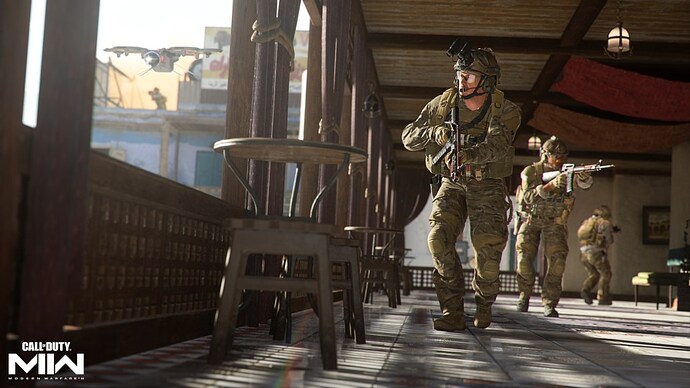 The MP is awesome. I especially really love the third person mode, it’s crazy what a difference a camera mode can make and it works fantastic, it’s really well done.

I love how there’s a lot of guns to unlock and after so many years of skipping them (BO 1 in 360 the last one for that gen, and AW for last gen) it just feels great to be back. I do wish I wouldn’t rage and get worked up so easily, but that’s just CoD I guess, lol.

If they were to add zombie mode that would be amazing, always loved zombie mode but I get that only Treyarch makes them.

If there’s enough (free) content in the coming 2 years, me and friends won’t need another MP shooter at all.