Originally released back in 2017, Assassin’s Creed: Origins has hit Xbox Game Pass on both console and PC. I beat it back at launch and have been going through it again to cover one of the best in the long-running series. Through a beautifully realized Ancient Egypt and beyond this reinvention of what an Assassin’s Creed game could be is as brilliant as ever, now runs at 4k/60fps on the Series X, and you can play it right now as part of your GP sub. Let’s go over why this is one of my favorite games of the last generation. 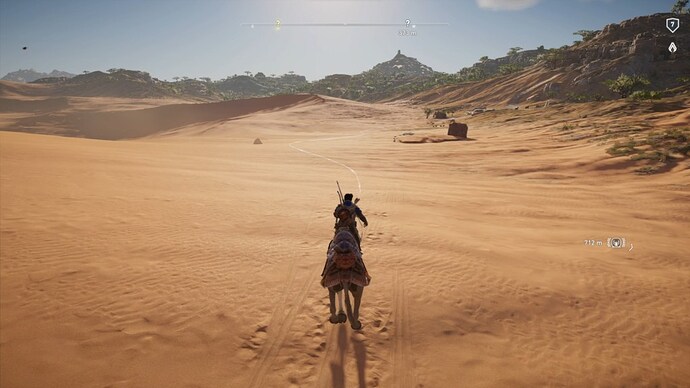 Bay(ek’s) Way or the Highway

You are Bayek of Siwa, a Medjay working in service of the Pharoah Ptolemy. Your life quickly turns sour and revenge is the name of this 40-50 hour long game. A lot has changed since its initial release, chief among them a forced leveling system that resulted in my original run having a lot of forced side questing so that I could keep progressing the golden path. Thankfully this has been greatly eased during the game’s long-running post-launch support and I found myself hopping from area to area across northeast Africa with ease.

This was the first AC game to truly embrace a chaotic open-world RPG style, and it wildly changed up the combat to something akin to Dark Souls though far less punishing. The first time you see the map you may feel overwhelmed, but thanks to the marvel of modern SSDs load times are down from over a minute per fast travel to an average of two to 8 seconds for me depending on how dense of an area I was loading out of/into. If you purchase the Curse of the Gods expansion you’ll also be offered the opportunity rather early on to power level your way up to level 45 which unlocks the entirety of the map if you so choose. I wouldn’t do this my first playthrough but it was a welcome option to see as someone who owns the expansions.

Origins may have my favorite story in an AC game. With a stellar protagonist in tow, his journey feels a bit more focused than my 2nd favorite, Odyssey. Bayek and his wife Aya are haunted by their past, but not blinded by it. They aren’t perfect, nor are they godlike as you find in Odyssey. Their love and pain feel real, and the writing is solid the majority of the time. The central mystery of just who the antagonists are as you hunt them down blossoms into something bigger and grander than it first appears. The typical appearances from ancient celebrities work well, and the conclusion is extremely satisfying. This review focuses on the base game since that is what you get with Game Pass, but if you find yourself enjoying things both expansions are good with the 1st being more of the main game’s setup and the 2nd being truly out there and fantastic. 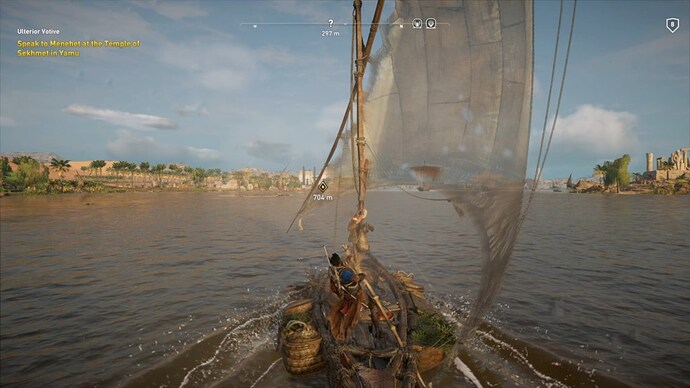 Running at 4k/60 on a Series X this game is still stunning. The player models and some texture work shows its age at times, but the environments look amazing. Some animations do appear stuck at 30fps on Bayek’s clothing, which can be jarring, but overall the free update makes things both look and feel a lot better. This is an extremely green and water-filled map in some areas, working in stark contrast to the blasted yellow and orange desserts of the western locales.

The soundtrack is good, though not as memorable as Odyssey’s. The voice actors, in general, are excellent, especially Bayek and Aya, but the NPC incidental dialogue while traveling around repeats far too often. Sound effects are typical for an AC game, which is to say they’re quite good!

One area the game is weak in comparison to its follow-up is the combat, which focuses on a weapon in your right hand, a shield in your left-hand approach that feels a bit too loose. Enemy attacks can be swift, unblockable, and downright cheap at times. The right bumper + right trigger “super” moves are extremely satisfying though and add a lot of depth to your choice as each weapon type will do something different once your meter is full. Bows can be extremely useful so make sure you take advantage of the very large leveling tree and power them up as quickly as you can. Getting headshot after headshot with a predator bow (well until you run out of your small ammo count) both feels great and helps even out the playing field. Despite having more combat options than any game before it this title still has a focus on stealth and quiet eliminations and Bayek can be quickly overcome by numbers (especially those dastardly archers).

The game leans into the fantastical more than its predecessors as well, both in the base game and its 2nd DLC especially. You can choose to leave the animus at any time (the machine that “transports” you into memories) and run around as the new character Leyla whenever you want, but the story there feels superficial and is a weak point. 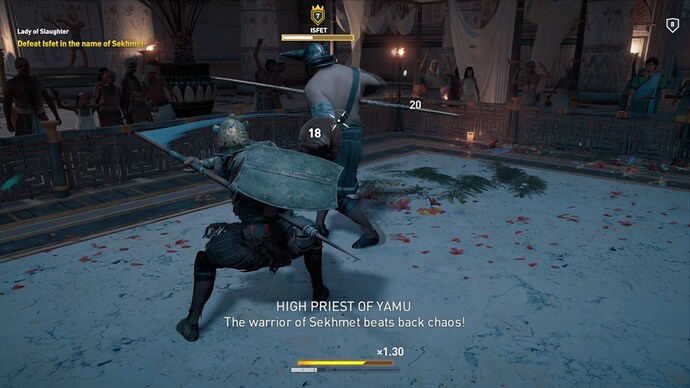 Assassin’s Creed Origins is a brilliant game and a hell of an addition to Xbox Game Pass. It runs well on older hardware but shines on the new new. Both visually and control wise it’ll be tough to ever go back to 30 frames per second after seeing how much better this game is as an experience on a Series console. Whether you’re looking for a fascinating trip through history or one hell of an action RPG there are few games out there better than this one.

An incredible game, one that I would rate even higher than you did! The setting is marvelous, and I did a lot of exploration in this. From the vast deserts, to mountains, the Nile delta, the old greek colonies… Alexandria, so much to discover.

Thanks, it falls short for me compared to Odyssey in the gameplay department. I just don’t like fighting in this one nearly as much as I do in Odyssey. It’s a phenomenal game though, man.

Thanks, it falls short for me compared to Odyssey in the gameplay department. I just don’t like fighting in this one nearly as much as I do in Odyssey. It’s a phenomenal game though, man.

I should probably play Odyssey soon hehe. Just need to find a 300 hour block of time…

I can’t play these games “just a little”, I’m all in once I start.

This game truly revolutionized the series and perfectly managed to turn it into a fantastic action-RPG with a huge world to explore and many hours of story driven quests. It’s really impressive how much content they manage to cram into these games, which all feel handcrafted and thoroughly playtested.

I could play this game endlessly. I think I may have restarted it like 3 times already. I just love it and Egypt is so fun to explore. The 60 FPS on Series X|S is just the icing on the cake.

One of my favorite open-worlds last-gen. It’s both so gorgeous and manages to have great depths as well, despite the formulaic structure. I LOVED the ancient tombs, one of my favorite iterations of dungeons in a modern open world. Also, it still never gets old to call senus and immediately get into its pov from the air, so impressive tech-wise.

For me, after the fps boost. The game look great on my Xbox series x. Looks better then lot of games that came out this year. I doing another ply through and really injoying it.