Colorado-based IllFonic of Friday The 13th: The Game fame had a rather muted soft launch for their brand new mixture of PvE and PvP shooter last year, partly thanks to an Epic Games Store exclusivity on the early access window on PC and only a PlayStation version as far as consoles go. The game showed promise, but there was just not enough variety or interest yet to become an online phenomenon. The 1.0 version is here, launching on Xbox consoles as well, and we’ve taken a look at this colourful shooter. Let’s check out Arcadegeddon on Xbox Series X, shall we? 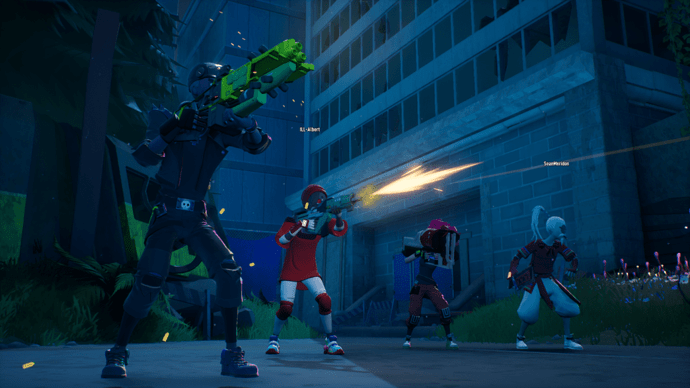 The basic premise of the game tries to evoke a feeling of nostalgia in gamers of old in the mythical arcade era, despite the actual game chasing newer multiplayer trends. Legendary programmer “Gilly” created his magnum opus, the underground arcade game to rule ’em all, but the evil corporation/game publisher FunFUNCo is trying to shut it down, as they dominate the whole field and want to destroy every self-made attempt. Arcade-aficionado gangs shall be recruited by our player to boost this arcade game’s player numbers, fill the leaderboard with massive high scores, and fight back FunFUNCo’s continued attempts to stop the game via the spread of a virus. The arcade game is the playground, the virus manifests itself predominantly as humanoid AI enemies, and players improve themselves via XP, unlocks and loot, tons of loot. A basic premise is to shoot a whole lot of enemies. Gamers rise up! Now, where did I hear this one before?

The story is nothing to write novels about, but the game’s general presentation is very pleasant. Smooth and fast gameplay over colourful, relatively sterile but generally well-readable areas, ranging from futuristic condos to medieval fantasy-esque green pastures, with post-apocalyptic wastelands and a literal Hell making the count in this digital game-in-a-game. Since it’s supposed to be a videogame, there’s not much reason or rhyme as to why the environments vary this much, but the result is always very pleasant on the eye. On the Xbox Series X version I tested for several hours, performance has also generally maintained a rock-solid 60 frames per second for most of the action, with brief drops only encountered at ridiculously big explosions involving several enemies and pieces of scenery. 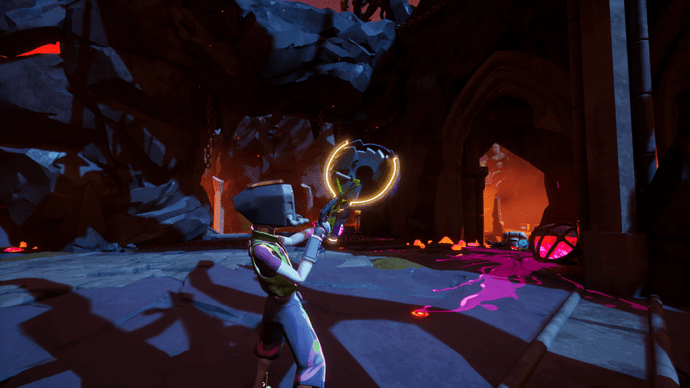 There isn’t a campaign mode to speak of, only procedurally generated levels that compose what essentially feel like rifts from a Diablo game. For each level, the game picks up a random environment, generates the level via pre-existing “blocks”, fills it up with randomized enemies and loot, gives a set of objectives such as capturing areas or hacking doors to progress, and places a handy exit and a mid-point break area to replenish health, ammo, change the character loadout or even buy new gear in the shop. With each level completed, the difficulty rises, though players can take it up a notch themselves by spending coins to increment the toughness of encounters. Naturally, the quality of the loot and the amount of XP gained also rise in this case. High-level equipment can often be found in chests of varying rarity colours as well, some of which are hidden behind some exploration – better check corners, rooftops, and hidden paths of levels that tend to be rather vertical and with a lot of room for maneuvering.

Every few levels an optional boss battle pops up. Players can rush for the standard finish of the level and avoid the hassle, or risk their lives in one of the four currently available high-octane boss fights, all preceded by their fancy intro and each with their own playable arena and rules. As the difficulty level rises, so do the boss fights’ phases, and these battles are undoubtedly the hardest encounters in these rift-like runs. Still, I’ve found optimal strategies to solo every one of them, with the level design generous enough to always offer some ways to escape, run behind cover, or even grab extra health and ammo when these two resources are becoming scarce on our digital avatar’s HUD. Players can effectively win this mode by defeating all 4 bosses, though the game’s formula still encourages coming back for more. Fatal mistakes aren’t always final: players get a limited amount of continue tickets from time to time, saving them from certain death as they get sent back to the last saving point at the start or the middle of the level. 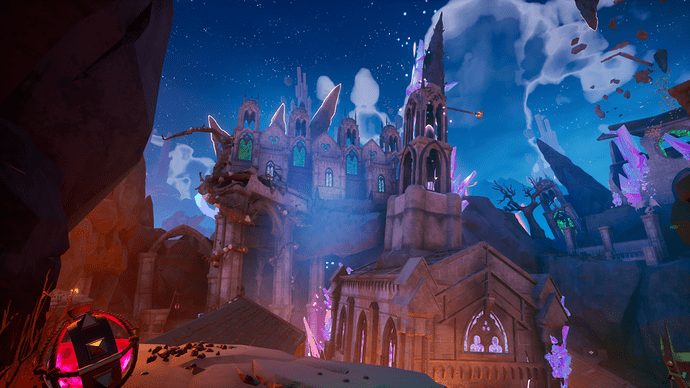 We still haven’t really talked about how Arcadegeddon plays, but fret not: it’s very polished and fun. It’s a highly precise and very acrobatic third person shooter that feels like something of a golden middleground between Sunset Overdrive’s wackiness and Rogue Company’s highly competitive environment. The player movement is fast and accurate, the traversal features fun double jumps and long slides, aiming is quick and snappy with various weapons providing aim assists of sorts, and the general shooting and fighting feels just right. Up to four players via online play (no split-screen or local play of any kind, sadly) can enter these virtual arenas, with the predictable healing, reviving, and similar mechanics joining the roster of things to do when teamed up with someone as opposed to playing it solo. Combat is rather varied too, with players being able to carry up to 3 different weapons out of a vast array of options, with even two different “magic” abilities thrown in, ranging from offensive to support skills. Given this is an online game that I got to play before its official launch, my co-op playtime has been rather limited, but I’m happy to report that the game is well-balanced for solo play, and the gameplay loop works very well even without co-op buddies to boot.

Since combat is the game’s bread and butter, it’s a relief that IllFonic nailed the gameplay loop so well. Enemy AI and variety could be a bit better, but there’s fast-paced movement, crunchy melee hits with even swords and baseball bats to boot, precise shooting with handy hitmarkers, and depleting health bars, with almost every kind of weapon delivering satisfying punches. Headshotting flying enemies from the skies, using the fireball ability to blast several enemy virii at once, using strange weaponry, or sticking to the classics like assault rifles, uzis, and shotguns. Each weapon has its raison d’être, especially factoring in the elemental damage and the mods. And honestly? The crunchy dubstep soundtrack, including household names of the genre like Ray Volpe, Getter, and AFK just makes the action even better. 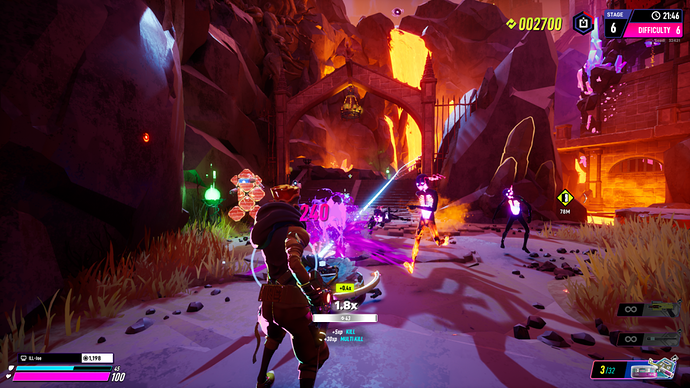 Aside from the numerous weapons, the game does offer a large array of mods that can be found all across the digital battlefields. These can be damage boosts to certain weapon types, faster reload times, shorter ability cooldowns, and so on, and they can be stacked by the dozen throughout the playthrough. By the end of the run, players can easily have like thirty different boosts, making the gameplay increasingly frantic and satisfying, as the players’ efficiency in dealing with increasingly tough opponents is also on the rise. Throughout the runs, as players keep mauling enemies with the various weapon types, they also level up and become more and more effective. Loot levels as we’d find in Borderlands and Diablo aren’t really a thing, though various rarity levels exist for the various weapons, the mods and upgradable weapons ensure there’s still a satisfying power level chase.

That’s the core of the game, ultimately: rushing through procedurally generated dungeons with increasingly menacing enemies, with dozens of difficulties players can muscle through. The campaign sees players explore a colourful arcade joint that serves as a hub, where they can recruit gang members who offer in-game challenges and loot. Expect the usual array of daily challenges, rotating cosmetic shop items with premium currencies and so on, plus handy matchmaking options to find helpful teammates throughout our fights. Running through already seen biomes and burning through the same couple dozen enemy types can certainly become repetitive after a while, so here’s hoping we get to see more variety in the future. There’s even an 8-player PvP mode, but once again it’s something I barely managed to scratch the surface of in this pre-launch window, so I’ll reserve my judgment on that for now. The game will launch with full cross-play between Xbox, PlayStation, and PC versions, though this function was not yet live on our build in the review window. 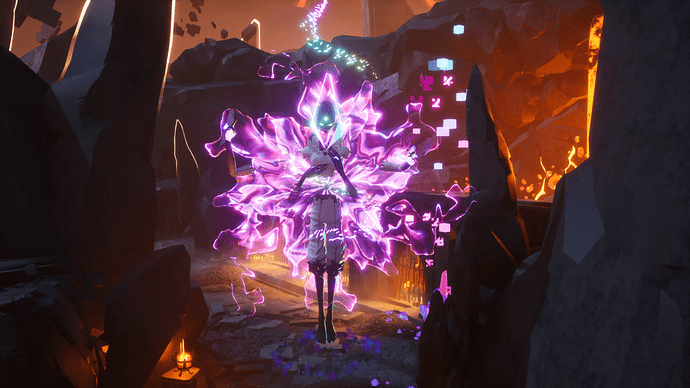 Ultimately, Arcadegeddon hits all the right notes when it comes to the gameplay loop, even if originality isn’t its strongest suit. It chases popular trends like roguelike elements, hordes of enemies to take down in co-op, a looter shooter style of progression, and the usual game-as-a-service tricks for long-term engagement. And even though the variety and AI could certainly be better, the core gameplay is extremely satisfying, thanks to excellent traversal, impactful shooting, and eye-catching loot to seek out. With more biomes, bosses and weapons promised in future updates as well, Arcadegeddon might just secretly become my go-to co-op shooter for some time, and I sincerely hope that the muted Early Access launch last year won’t end up hurting the game’s long-term plans. Because even with its lack of originality and limited variety, Arcadegeddon offers a surprisingly satisfying and addictive gameplay loop, one that deserves to be built upon for months or years. 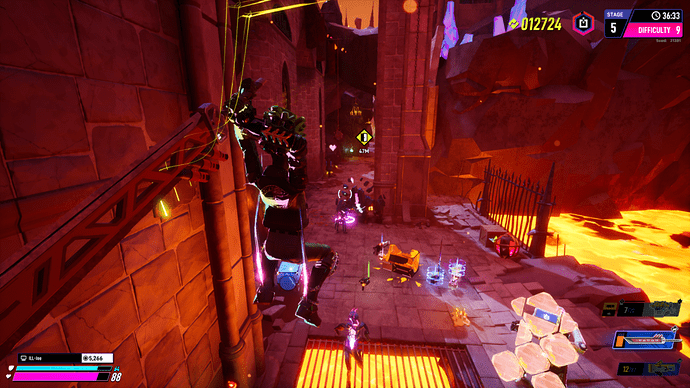 Had a great time with this game

Progress after the pre-release window has been reset, but even with the lower level loot I was kicking ass all across again. Really fun game with an excellent combat.