Do you love doing laundry? Do idle games and their power ramp mechanics cause you to experience bliss? Are you a 90’s kid or young enough to want to experience “the old days”? Boy howdy do I have a game for you then. Arcade Paradise is a unique blend of laundromat sim, coming-of-age storytelling, and retro arcade mini-game fun. It takes all the hallmarks of the idle game genre and puts it into something more tangible and is far less of a dressed-up spreadsheet. I had a great time with it so let’s break it all down. 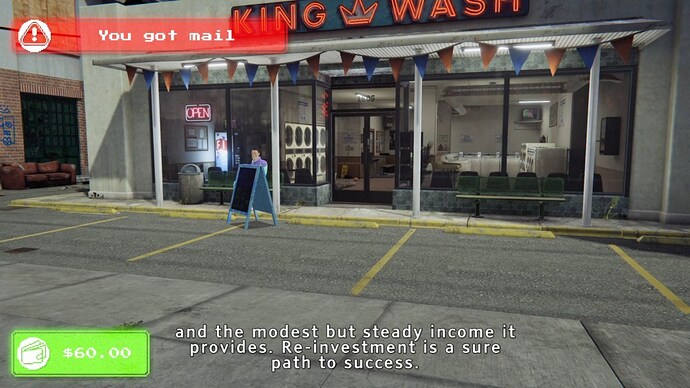 Keep Cleaning All Our Lives

You are Ashley, and your rich British dad has forced you into working in the family’s old and rundown laundromat. You’ll begin your days focused on getting loads of clothes into and out of washers and dryers as quickly as possible to earn cash. Immediately I was struck by the style of the UI. Everything goal you achieve earns a pop-up pixelated video game style fanfare that is both humorous and damned cool looking. Another daily task is cleaning up all the trash left behind by your degenerate customers and bringing it over to the dumpster outside turns into yet another fun minigame. Quickly though you’ll notice a few old arcade machines in a back room and that starts you down the path of transforming this simple, unassuming laundromat into the most happening Arcade the city has seen in a long time.

The whole setup of the game mirrors that of the best idle clickers. You have a large number of tasks that you have to do manually to start and over time you’ll use your dad’s funding to automate them. Eventually, I barely had to touch anything in the laundromat, and I was earning thousands per day as time passed by. It can feel a bit slow to start but once you realize there is no real penalty for ignoring the laundry side of things when you’d rather be playing games it clicked. This is a chill, relaxed game that lets you ramp up the stress to make more money if you want, but it’s never a requirement.

It smartly has meters tied to nearly everything you do, so that sense of progression is always feeding into your dopamine receptors. Even just playing the arcade machines can help level them up so that they earn you more passive income and increase the popularity of your business. All money you earn has to be transferred into the vault before it can be spent, which of course becomes another minigame. Stay too late and fall asleep? You get a time penalty for the next day, but even that can be remedied as you purchase a cheap car to get you back and forth instead of using the city bus. It’s a smart setup that keeps the frustration down early on. I knew that the ability to get rid of minor inconveniences was just around the corner. That touches on the “sim” aspects of things, but the heart of the game is the Arcade. 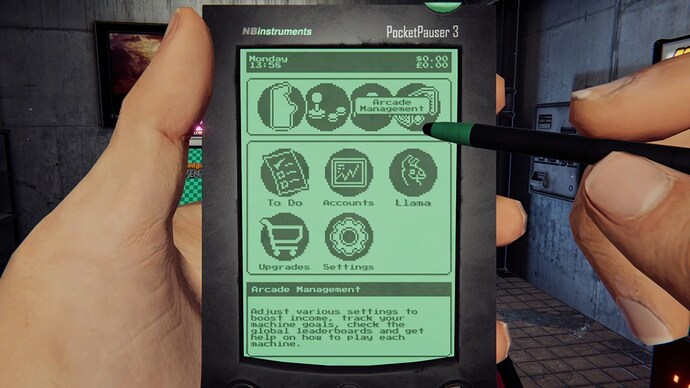 Living in an Arcade Paradise

Featuring over 35 fully playable arcade machines, I ended up sinking a lot of time into most of them. There are some damned fun minigames available, though I found myself spending the most time with darts and pool just like in real life. A ton of work has gone into the thought behind and gameplay within most of the titles. Humor permeates everything, and while a few are far too basic to hold your interest a couple of them like the twin-stick zombie shooter are fun as hell to play. A large number of them feature local co-op as well. Sadly there is no online available as far as I can tell.

Each machine has its own cabinet and you’ll use your map (which was annoyingly bugged for me in the pre-launch build) to set where each of them goes. As you expand your business’ footprint you’ll unlock extra machines with various ones that only fit in certain spots. There is even a jukebox filled with real-world music that will play as you work and each of them will passively generate income. Where you position things and what difficulty and price you set each machine becomes a major part of your business. Set things expensive and hard and no one will play, put it on easy and cheap and game sessions will last so long that you lose out as well. A popular machine can help boost the business of the lesser loved by being put next to them as well.

Each machine has a hopper that early on you will have to empty out yourself. Eventually, though you can hire an assistant who does it automatically which is a godsend. To get the British pound currency from your pops that you’ll need for those types of upgrades though you’ll need to accomplish a set of daily tasks. Every day you get three randomly chosen ones that can range from “complete 15 loads of laundry” to “kill x amount of people in y game in z way”. Some are easy, some are impossible, and it was the one main area of frustration for me. Far too many of the tasks involved getting high scores or clears in a game that would take up most of my daily time. Others would take 2 or 3 seconds and it all felt poorly balanced. 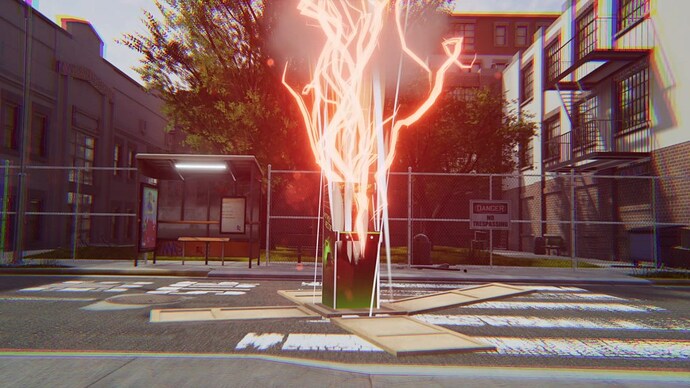 Graphically it’s a good-looking game that smartly stays within the confines of its budget and scope. You begin each day taking the bus (or eventually your car) to work. You can walk a bit of the way up and down the street but 99.9% of your time will be spent inside your laundromatcade. Textures can be quite blurry and low rez up close, especially once you unlock the zoom option, but the arcade machines themselves look fantastic. They’re bright, colorful, and loud in a way that hit the tiny bit of nostalgia left in my nearly 40-year-old brain.

As you grow in popularity your store will be filled with terrifying-looking human models that stand in place and start to pixelate and disappear if you get too close. One of these is an unfortunate woman whose head is not directly connected to her body. A lot of the models with longer hair are also broken in that their hair has layers of opacity. The outer hair is an odd, shimmering see-through and that pixelization effect when you get too close will never not be creepy.

There isn’t a lot of audio work outside of the arcade machines but once you purchase the jukebox you are given a handful of good songs that you can add to by purchasing more through your work PC. That PC btw is hilarious for someone who was a teen in the mid-’90s. It’s 100% a windows 98 machine and I felt right at home using it in its very limited capacity. The arcade machines themselves in general have great music, hilariously low-quality voices, and era-appropriate sound effects. They are the star of the game, and every time I unlocked a new one the animation that accompanied its arrival the next day put a goofy smile on my face every time.

There are a few helpful accessibility options as well which I ended up turning on. They allow you to do the minigames or laundry part of the job without having to hold the button down the entire time. As you will be doing these tasks a lot I recommend setting things to push instead of hold in the options. All of these settings along with managing your arcade machines (and playing jumpy llama) are accessed through your PDA. Just one of the many predecessors to the modern smartphone. One other thing to bring up is sadly I don’t know the price of the game at launch. If it’s $30 US or under I think it’s well worth that price. 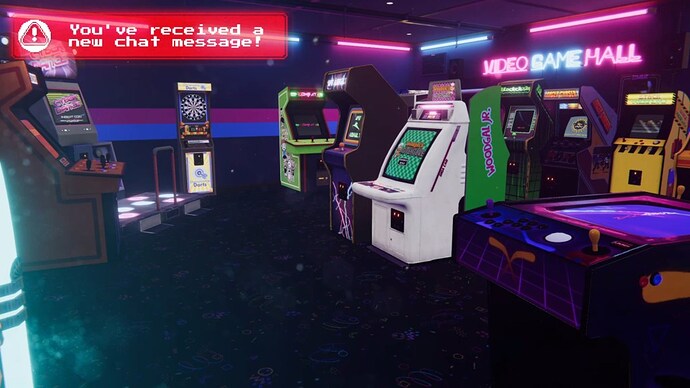 Arcade Paradise is a delightful surprise. Full of wit, heart, and damned fun minigames it’s worth a purchase if the thought of an idle-style laundromat management sim full of fun as hell arcade games sounds enticing. It’s a relaxed, radical tubular time and I can’t wait to see what the devs come up with next.

I bought this too…because I have a sickness and cant stop buying games.

I bought this too…because I have a sickness and cant stop buying games.

It looks super enjoyable. I hadn’t even heard of it until I watched this review. About half way in I was like…yup, gonna have to buy that.

I saw a review that said it drags after a while, thought on this @Doncabesa ?

I saw a review that said it drags after a while, thought on this @Doncabesa ?

Indeed, thanks. Too much to play right now but it’s on my radar. Nice review bud, keep grinding!

Wanted to follow up: your review convinced me to recommend this one for a video game club I “co-run”, and we’re going to play it over the course of the next month or so. Thanks!

Wanted to follow up: your review convinced me to recommend this one for a video game club I “co-run”, and we’re going to play it over the course of the next month or so. Thanks!

I like it. Jesse’s description of it as similar to one of the “Idle Clicker” type games but with stuff to actually do is on point.

Its a really good “turn your brain off and enjoy” type game. I feel ashamed when I don’t get S rank on my laundry.

I like it. Jesse’s description of it as similar to one of the “Idle Clicker” type games but with stuff to actually do is on point.

Its a really good “turn your brain off and enjoy” type game. I feel ashamed when I don’t get S rank on my laundry.

I love how everything is “gamified”. Plunging a toilet, taking out trash…it’s awesome and an effective and engaging gameplay loop