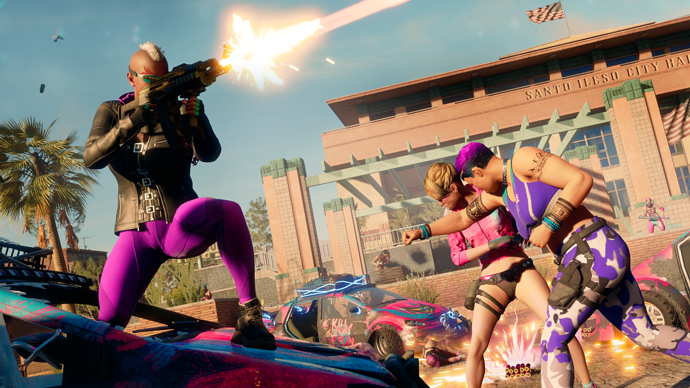 Saints Row is back and in some ways bigger than ever. Developer Deep Silver Volition is restarting things with a new take on the origin of the Saints gang in the new city of Santo Ileso. This decently large-looking map is a homage to the American Southwest, and outside of some returning stores and other nods to the original 4 games, this is a completely new story with no direct connections. There is a lot to unpack in the 26-minute long direct-feed preview that we were invited to watch so let’s get into it. 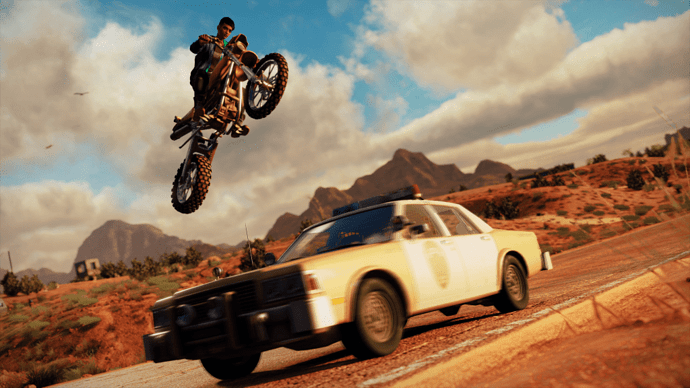 The Saints do not exist at the start of the game, instead, you are on a journey to be a highly customizable in every damned way (seriously you can look like almost anything you want) boss. Your boss is part of a group of four friends made up from each of the rival factions in the city. You and your roommates eventually tire of being stuck at the bottom rung of organizations that don’t seem to care about you and begin assembling your crew with your player character at the head of it all.

The preview started with a basic robbery mission with you and your friends robbing a payday loan store. Graphically the cutscenes are quite stylized and looked great. Voice acting was hit or miss with the main character sounding oddly robotic in how her dialogue was delivered. After what appears to be a successful job the cops quickly arrive, and the new sideswipe mechanic is showcased. Acting as both a battering ram and light speed boost you can quickly dart to the left or right to wreck any car in your way. Despite the goofy tones of things, the player murdered indiscriminately in this footage with a seeming emphasis on fun over all else. This game feels more grounded than Saints Row 3 did, but a bit more over the top than SR2.

After blowing up a dozen or so cop cars the player ran into a group from the Los Panteros gang. They’ve destroyed the player’s switch car for parts, so like any good psychopath, the player guns them down with what looked to be solid and weighty feeling combat. Button prompts were not shown on the UI so it’s unclear where the game was being played or with what particular input device. Enemies were not too bullet spongey with only a few headshots needed to take out most. The main thing showcased was the finisher where the player character stuck a grenade down the pants of an enemy and then threw them 20 feet into their friends blowing them and their vehicles sky high.

We were shown some more driving (with ridiculously unrealistic physics in the cutscene) and a random event in the open world where the player character attempted (successfully) to procure the cash inside an armored car. This brought in more police who were viciously dispatched by our psychotic hero until it was time to make a quick exit in a stolen car. Next up the new car surfing mechanic was showcased in a side mission where, like always, things had gone wrong and the cops were in hot pursuit. You can shoot out the window with a limited amount of movement or climb up on top of your moving vehicle and have a full 360 degrees of firing freedom.

Player customization was quickly shown off with a trip to the store to buy a cowboy-themed getup. After that quick change of outfits, the car ejection into the wingsuit traversal system was highlighted. After hitting a jump onto the roof of a building the player can eject out of the vehicle (if the ejection seat mod is installed of course) and then wingsuit around the city. As long as there is a pedestrian around you a press of a button will have you dive down and then bounce off of their head, comically ejecting back up and continuing your flight.

Multiple missions were showcased, one of which had you blast your way into a factory using an attack helicopter. After dispatching all the enemies outside and landing on the roof the player chose to assign perks for fire resistance through their phone-based UI to counter the flame attacks of the gang they were about to fight face to face. Quickly changing up your look, perks, and weapons on the fly is a major part of how the game balances its difficulty. You have a lot of tools at your disposal and they’re constantly trying to get you to use them. 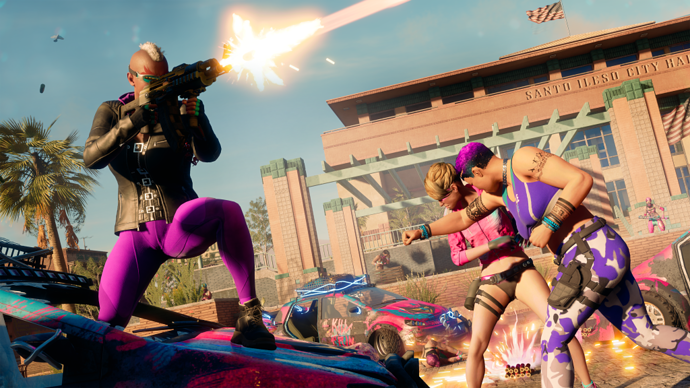 Tools of the Trade

This is a very big game and you appear to have a lot of agency in how you approach it. Ventures are one of the main ways you grow your business and there are 14 of them in total with 5 levels to each one. These are how you open up both customization options such as the vehicle garage and gain access to certain side missions. As you unlock more areas of the map you gain access to all of the customization options that have been showcased so far. We were told that none of what has been showcased publicly is tied to a DLC or microtransaction and can be earned entirely in-game. The depth of these customizations is staggering, especially when it comes to the player character.

The biggest part of this preview for me though was finding out about the cooperative play. The entire game is 100% available in drop-in/drop-out co-op. Nothing was said about crossplay but the progression system seems like it might finally solve the issues I’ve had with games like Far Cry. While completing missions as a co-op partner does not complete it in your single-player game it does check it off on your account so that you can choose to skip it when it comes up in your playthrough. You get all the experience and rewards for doing it in co-op as well. Having this choice on if I want to replay a mission I’ve already completed or not is great, as most other games simply don’t record if you did or did not already beat something in a friend’s game and you’re forced to complete it all again in your own. Things do appear to be limited to two players cooperatively based on the footage we were shown.

After some driving and flying around a Mayhem, the event was used to show off the co-op play. It lived up to its name as each player had unlimited RPG ammo and was tasked with destroying as much of the city as they could with dollar amounts capping off each explosion until the four million dollar damage goal was reached. The preview footage finished off with a massive main story mission where you were attempting to rescue a kidnapped friend.

A question and answer session capped things off where we learned that the UI is joining in the highly customizable fun. You can turn off health bars and more elements as you wish and there is a big emphasis on accessibility features.  The difficulty, motion sickness, and hearing and vision disabilities were among the settings highlighted. The biggest takeaway though was their emphasis on having the city feel alive. They want it to feel like a living and breathing world where things are never stale or empty, at least in the city areas. There was quite a large desert locale shown off early on. 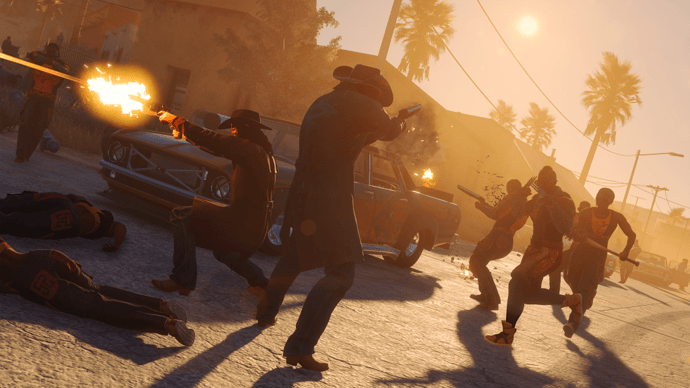 That’s it, the gameplay looked solid, the story while not the most interesting wasn’t boring, and the graphics looked great running at a solid 60 frames per second (though we’re not sure on what hardware). The game is done and in its toughest phase, polishing. Saints Row is due to arrive on August 23rd on Xbox, Playstation, and PC and after seeing this gameplay I am pretty freaking excited to get my hands on it.

This would be a very strong Game Pass addition, for sure.

This would be a very strong Game Pass addition, for sure.

Yes, it seems like a good match for both parties.

Not gonna lie. I had zero interest in this game. Now I have some

Well put together preview with this, Jess

It will come to Gamepass about a year after release. Nobody is waiting that long. This game is going to sell 10 million plus. There is a lot of fed up GTA fans that are starving for a new GTA game. This will be a big hit.

It looks to me as though this was at least partially from Xbox. The ui in the phone based menu at 4:04 in the video has x y a b rb and lb listed as controls. Nice video and honestly looks fun. I’ve never played a Saints Row before but might try, esp if in Game Pass. 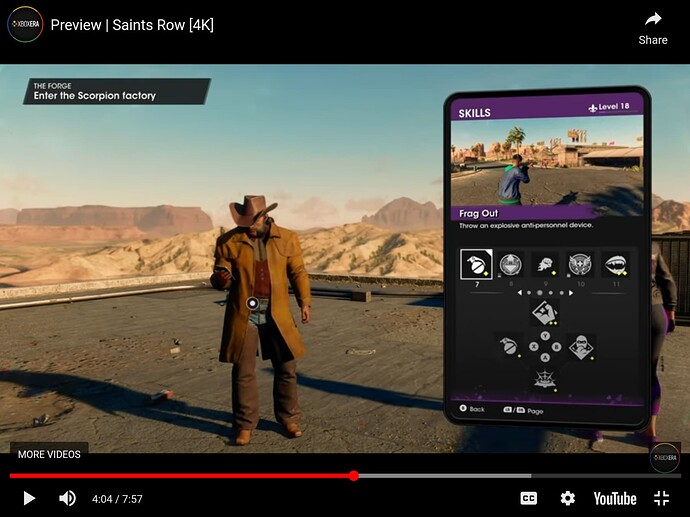 It will come to Gamepass about a year after release. Nobody is waiting that long. This game is going to sell 10 million plus. There is a lot of fed up GTA fans that are starving for a new GTA game. This will be a big hit.

Well, Xbox schedule cleared up a bit this year so one could assume it’s wallet opening time.

Well, Xbox schedule cleared up a bit this year so one could assume it’s wallet opening time.

I disagree, Saints Row has everything going for it. Saints Row doesnt need Gamepass. There is a serious void left by Rockstar abandoning GTA for an entire generation. Saints Row should sell huge numbers.

I disagree, Saints Row has everything going for it. Saints Row doesnt need Gamepass. There is a serious void left by Rockstar abandoning GTA for an entire generation. Saints Row should sell huge numbers.

I’m not saying the game needs it, but that if Xbox is willing to pay up it’s a good match for both.

Watched the video just now and I gotta say that this looks very fun actually, like exactly the kind of game that has been missing for a while now. I loved the first game, 2 was great too but they started losing me with 3 and so on, just went too over the top and just not for me.

It seems like a good choice for the Gap until GTA6 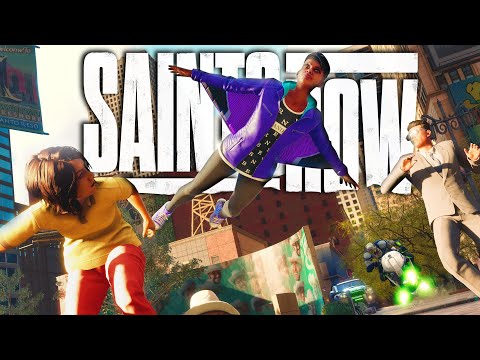 Truly would be a awesome Game Pass addition, but if not, I might buy it with my brother.

I do think this game would be perfect for Gamepass.