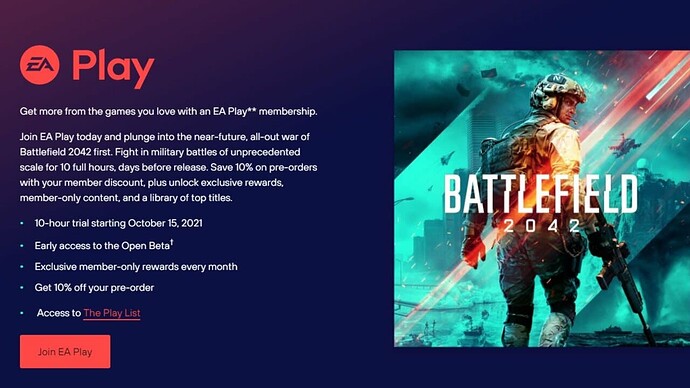 The game is in dire need of players, you would think EA would put the full game up on access sooner.

There’s an article going around saying this game has only 1k players on steam, and each time I’ve tried the free 10 hours ea access trial, I can’t find a single server in my region.

I Doubt it. It’s still EA we’re talking about. I don’t think it’ll come to EA Play before it needs to/ before the usual pattern permits it to

Does it even matter at this point?

I seriously doubt GP is going to save it, I havn’t seen a BF drop off like this so it’s dropping off for a reason and I doubt its something that can be fixed without huge fundamental changes

More players isn’t going to save it, it will give it a temporary boost and then die again

It’s not worth it, play V instead, a much better experience in every way. I regret spending 90 euros for the Gold edition even though I had some fun with it for 20ish hours…

I don’t think it makes sense for EA to push for broader exposure of BF 2042 until they address more of the community complaints. Only once they have that ironed out should they push out to subscription services like EA Play and GamePass.