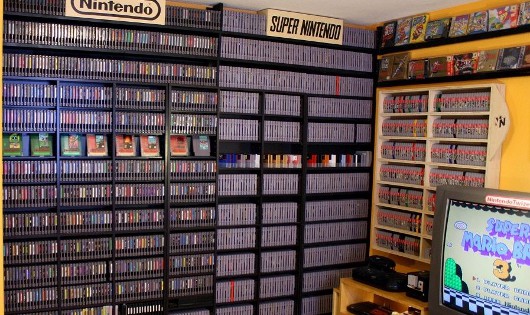 Nay for me. The number of games I have is not a badge of honor.

As you already know, nay for me.

Used to collect games but I would never play any of them. So halfway or so into the Xbox 360/PS3 generation, I changed my mentality and have since stuck with it for over a decade. I only buy games digitally that have post launch expansions and that im 100% all in with. Otherwise, I buy games physically at GameStop and with each game, I will play it to completion, then trade it in and move on to my next new game.

GameStop isn’t favorable for a lot of people but in over 20 years, I never ever had a single issue and will get some good trade in bonuses because if there’s a trade in “towards pre-ordering a select game, get an extra 10% bonus”, the employee will automatically do this so I get the extra 10% bonus by pre-ordering one of those select games with a $5 deposit which is all trade in credit and then when I eventually go in the next time, I just cancel the pre-order and get back the $5.

Also, since im a Power Up Rewards member, I get a $5 coupon which can only be used on games released so if I go pick up a game on release day, it becomes $5 cheaper. They should have the coupons stack instead of expiring at the end of the month but can’t get everything. lol

Best upcoming deal for me will be Far Cry 6 which comes with a $10 Game Coin that can be used on a future purchase plus my $5 coupon in October will already make the game $45 when you factor in both the Game Coin and Coupon. Then, when I trade it in, if I get $33 for the game which is a good bet, the game would only cost me $12 after trading it in and best of all, I didn’t have to wait for a sale or this or that. Day one. Getting a $60 game on day one for $12 after trading it in is a freaking steal.

Something like that pic is cool, but I’ve been all digital for almost 5 years now and I’m never going back. Just way too convenient.

I used to have such a large collection of physical things but have embraced digital over a decade ago for gaming and entertainment. I no longer have the patience nor space for physical media.

I got rid of the following physical collections:

Here’s the legacy consoles I got rid of:

Here’s the consoles I still have:

I collect cool items and such but not actual games. My favorite item is a 15 dollar figure of Dan Elektro. A fictional caricature of an old GamePro writer.

Nay, i’m over all these plastic boxes cluttering my home. If your game has a nice steelbook i may change my mind but otherwise i’m full digital.

You can’t take it with you, and physical media just weighs you down and makes moving house more of a pain in the ass. Digital is also just a lot more convenient.

Only physical media I still ocassionally buy is CDs when a good version of a classical piece isn’t available on Apple Music, and even then I immediately make a lossless rip to digital. Very occasionally will buy a DVD or Blu-ray if I just can’t find a film or TV series I really want to watch through streaming.

I used to have a large physical collection of books, games, movies & music but slowly started to go all digital towards the end of the 360 generation.

The only thing left these days are my books. I’m still stuck in my ways there. I can’t bring myself to go digital, the physical sensation of reading a book is too special to me.

Totally all digital for my games though. It works for me, as I can use Game Pass to experiment & only spend money on titles that I really want to own & replay.

Used to have an enormous collection. I’ve sold most of my PS3 and PS4 games and practically all of my retro games. My only remaining large collections are Xbox 360 and XB1 and even those I have a lot less physical games now than I did a couple years ago.

I just got tired of looking at sealed PS2 games sitting on the shelf that I hadn’t played in 20 years and was never going to play. I still buy physical games now but it’s so I can resell it when I’m done. Digital is so convenient though, especially since I have multiple Xboxes in the house and frequently bounce around between them. The digital experience is so seamless.

Nah for me. Went fully digital when the XBO and PS4 came out since you have to install games either way now. So I figured whats the point? Now movies? Thats a while different convo lol!

I haven’t own any physical games since 360, just an absolute waste of space.

Everything up until ps2/xbox era = Physical

Everything since the 360/ps3 era = Digital

Ever since game pass iv completely changed my view on modern games, I used to be hardcore everything physical/despised digital only content, even just a couple years ago before gamepass

Now I just dont care, there’s nothing I care about owning in the modern era now gamepass is a thing, especially when so many games require patches to even work anyway so whats the point

I sold my small collection of games after the 360 generation and have been all digital since. I never put a single disk into my Xbox one and now I have a series S.

Outside of a decent amount of old school stuff. I don’t even keep the classic stuff I have at my own place. It is all in my best friend’s basement/man cave.

I own zero physical games.

Yay because I refuse to spend 60 bucks on a digital game I won’t care about in 2 months.

Digital gsmes for me are sale only games at a budget price. I rarely buy full priced digital gsmes and thst it change. Unless it’s a game I’m absolutely going to play for a long long time. But even then I prefer to own physical versions.

Physical games might be gone by next gen. So I’ll buy all the ones I want now.

Everything up until ps2/xbox era = Physical

Everything since the 360/ps3 era = Digital

Ever since game pass iv completely changed my view on modern games, I used to be hardcore everything physical/despised digital only content, even just a couple years ago before gamepass

Now I just dont care, there’s nothing I care about owning in the modern era now gamepass is a thing, especially when so many games require patches to even work anyway so whats the point

Gamepass is a different discussion. Yeah it’s great but when it comes to spending 60 dollars on digital or physical. There’s no way I’m going digital not for a long time.

There’s been situations where I’ll get physical even if its on gamepass. DQXI and Hades being example. I would like to own physical copies of those games. And they probably won’t be on gamepass forever.

I usually tend to get the digital release cause I m not a collector. I Don t know if that make sense nowadays because as soon you insert a disc it starts loading on the regular a huge patch. I ve bought days gone and it’s a different play experience between playing without patches and a fully patched game.

Depends on the game for me. Multiplayer/server check-in games, not so much. Why own a disc of something that’ll be useless when they turn off the servers? (recent examples for me are Hitman, Destiny, CoD, Battlefield, Fallout 76, etc.)

Nintendo games I pick up physically, because they tend to hold their resale value, and sometimes I’m sentimental for them.