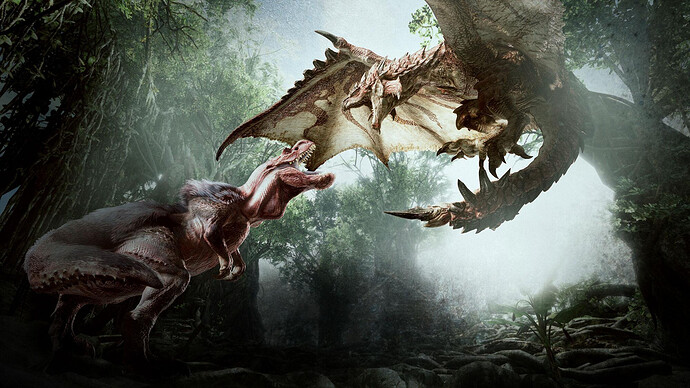 Decided to continue with Iceborne today, along with my buddies and it’s still such a great game. But at the moment we’re stuck, one monster is giving us a hard time and he’s called Black Veil Vaal Hazak. His attacks are just horrible and so damn hard to avoid, like those attacks where he blows some weird poison mist and his range is insane.

And at times I try to stand under him but then he lets loose the same kind of mist and this really fucks your health up badly. What can we do to actually stand a chance against this beast?

Also, this is something I’ve always wondered and never bothered to ask (not even after like 500 hours of MHW in total, lol). When I am attacking with my weapon, whether it’s a sword, dual blades etc and I press the left stick in a different direction my character doesn’t start aiming there. So basically very often my character is getting into a long ass combo(dual blades for example) where he keeps mashing away while the monster is already not in reach, can I not just “move” that attack towards the monster again?

Take Witcher 3 for example, if I’m slashing my sword forwards and I then want to attack behind me, I believe I can just hold the stick down and Geralt will do that. I can’t with MHW?

I’m still not sure what is more important. Should I always go for the highest defense for armor parts or something else? I often notice how my health gets destroyed in no time, even when my defense is high. I am doing something wrong, but what?

…r play with a weapon with Elderseal which I think reduce the duration of the mist.

Armor Rating is the last thing you should worried about. If you are comfortable go full dmg. Critical boost = critical eye = weakness exploit is much better than attack (+5 for critical boost should be enough). But there is a difference between ele weapons and raw (blast/para/poi) weapons. The thing I wrote is for raw weapons and for ele weapons you want to go max lvl for the ele weapon attribute with the max crit eye/crit boost/weak exploit. Agitator and peak performance are also strong dmg boosts factors. If you want to play more defensive health boost 3 is the best option. After that divine blessing 5. Evade windows 3 give you dark souls like iframe.

And as for weaknesses of monsters themselves, I should always go with a element a monster is weak too, right? So I should have my jewels for critical boost, eye and weakness exploit? And equip armor that have these same skills or should I pick armor parts that protect me from certain elements that a particular monster uses against me?

Correct on the dmg part.

And the Ele rest part: Ele resistance is not that important. Health Boost 3 + Divine Protection 5 is much better. You can also cook special meals to raise your resistance. Better look out for some other annoying status effects.

I look in there, but what’s it called? Would be so good to disable this.

Correct on the dmg part.

And the Ele rest part: Ele resistance is not that important. Health Boost 3 + Divine Protection 5 is much better. You can also cook special meals to raise your resistance. Better look out for some other annoying status effects.

Much appreciated. I’ll look into this. Right now Vaal is halting our progress through Iceborne.