More Signs the 'Destiny' Mobile Game May Be Announced Next Week

In case you missed it, next Tuesday, August 23rd, is Bungie’s annual Destiny 2 Showcase. The tradition began back in 2019 with the reveal of the Shadowkeep expansion. Since then, it’s been the E3 of Destiny, marking their biggest announcements each year.

Recently, there have been rumors circulating that a Destiny mobile game is gearing up for a reveal as part of the $100 million deal with Chinese gaming mogul, NetEase. According to a report on TheGamePost, an Artist from NetEase shared that they lent a hand in developing a “announced FPS mobile game” in cooperation with Bungie on their LinkedIn profile. The report goes on to point back to multiple job listings for an upcoming mobile project in the Destiny IP that NetEase had posted in September 2021.

I’ve spent plenty of time in the Destiny community and observing the leaks and rumors that come out of this or that job posting, and while these already seemed completely legitimate in my eyes, Bungie has given me even more reason to believe so.

Earlier today, Bungie uploaded a cut little one-minute long trailer (seen above) to help build hype and remind people of the Showcase’s date. They also updated the page on their website dedicated to the event, showing Guardians where they can catch it live. On this page, the typical YouTube and Twitch links are posted, but it’s the link to Chinese streaming/YouTube clone BiliBili that caught my eye.

Bungie is certainly one of those studios that does what they can to be as inclusive as possible and I personally appreciate it beyond comprehension. But, this is the first time they’ve advertising their stream to an Eastern market right on the page. Last year’s reveal stream was advertised as being available everywhere, too, but only Twitch was specifically called out on the hype page, which is still up.

Not only is this year’s show being advertised on BiliBili, but the preshow has been noted to only be available in English, where last year’s made no distinction. 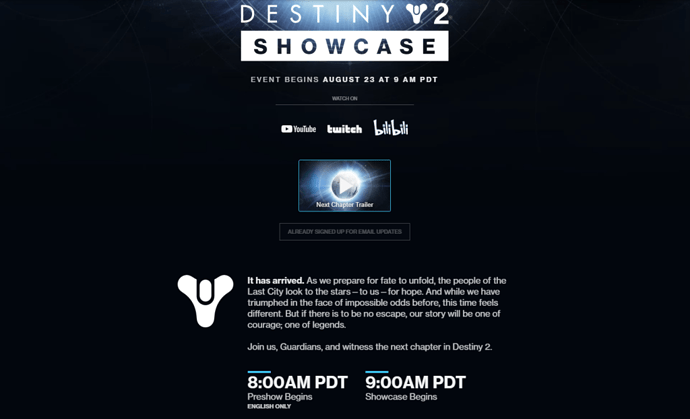 All signed point to a reveal that Eastern markets, and specifically one Chinese video game company *cough cough* NetEase *cough cough*, should look forward to, perhaps even more than usual.

The Destiny 2 Showcase on August 23rd is set to reveal Season 18 in Destiny 2, the upcoming Lightfall expansion and other goodies. This also comes in the wake of things like a new green subclass potentially leaking via a Bungie artist’s ArtStation account. They were showing off one of the cool Finisher animations, just to have it be overshadowed by the color green and a yet-to-be-seen Super icon. It was removed shortly after being discovered and has since been reuploaded without any HUD at all.

Will Lightfall bring the fifth subclass to game? Will we finally get to see Destiny: Mobile? Looks like we’ll just have to wait until next week to find out.

I took it up when it was added to GamePass. played maybe 20 or so hours. Needless to say I needed guidance because a lot of lore was confusing. I’m sorry but the community at that time was just so toxic. That combined with me having to play alone (only 1 friend played it and he was eons ahead) I dropped it. I know that had I been with it earlier I’d have been an absolute addict. I’m a cursory fan at best right now.

I was a fan of the GamePlay shown during the early Destiny demos aand betas but Destiny 1 was too much of a skinner box to bother rewarding Bungie, so mostly skipped it. I kept an eye on it but they kept making it worse by adding even more currencies and busy work and limits. Years later I tried to get into playing Destiny 2 but the campaign was a complete cluster-muck where entire areas and story were missing from the game. They made it impossible for a new player to get into the game through the campaign. Instead you need to have MP friends who can drag you along to power level you and get you the required Meta-Gear du-jour. Then once you’re set, Bungie will just completely muck with the stats and nerf what’s being used.

So no, not a fan of what Bungie produces anymore.

I’m a huge Destiny fan. It’s just in a lull period for me. Hopefully the new season restores the feeling.