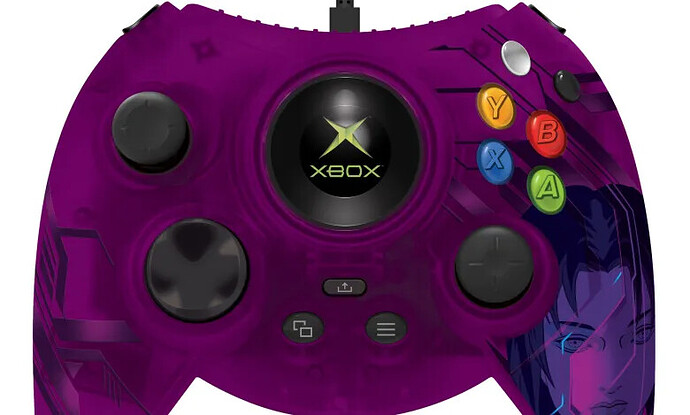 Hyperkin has announced a new Cortana-themed Duke style Xbox Series/One controller and it is available for pre-order retailing at an MSRP of $89.99 US immediately for release on November 15th. Information from Hyperkin is below:

Hyperkin Announces Cortana Edition Duke as Well as Xbox 20th Anniversary Dukes
Coming This November
September 23, 2021 (Los Angeles, Calif.) Hyperkin has announced, in collaboration with Xbox
and 343 Industries, that they will be releasing a collectible Cortana Edition Hyperkin Duke, for
Xbox Series X|S, and Xbox One in Q4 of this year. Just in time for the Dec. 8th release of Halo
Infinite, this hefty transparent purple beast of a controller commemorates 20 years since
everyone’s favorite clever AI adorned gamers’ TV screens.
In 2018, in collaboration with Xbox, Hyperkin released a replica of the original Duke controller
for Xbox One. A hit with Original Xbox fans, but also people just marveling at its sheer size, the
Hyperkin Duke is both a burst of nostalgia and a serious option for competitive play. You can
read the Duke’s 20-year history in this Engadget article by Tim Seppala.
In this 2021 update, The righthand corner bears Cortana’s face, along with her familiar body
designs throughout the controller. The controller itself is a bold, transparent purple, much like
Cortana’s holographic form. A Cortana montage video plays right in the Xbox button when
pressed.
Cortana Edition
• SPECIAL HALO 20TH ANNIVERSARY CORTANA DESIGN
• CORTANA MONTAGE PLAYED RIGHT INSIDE THE XBOX BUTTON
• BUMPERS MIRROR BLACK & WHITE BUTTONS
• PRECISION ANALOG TRIGGERS
• 3.5 MM HEADSET JACK
• VIBRATION FEEDBACK FOR REALISTIC EXPERIENCES
• DETACHABLE TYPE C CABLE
Shown earlier in the summer, Hyperkin is also releasing 20th anniversary Dukes, designed for
Xbox, coming in both black and white with the official Xbox 20th anniversary logo. When the
Xbox button is pressed, the Original Xbox startup animation plays, but this time with the updated
Xbox logo

As a big handed gamer that actually thought the OG Xbox controller was great, wish they would do a wireless one.