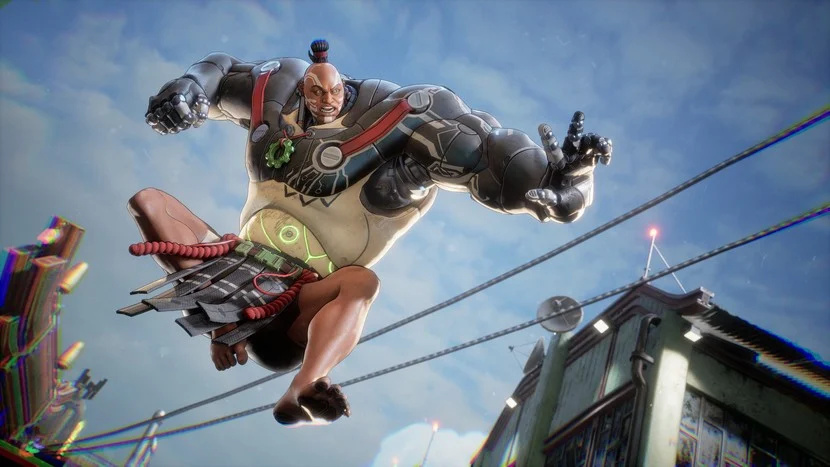 All the way back in July 2020, Bleeding Edge got a brand new fighter, dubbed Azrael, joining what, at least appeared to be, decent on-going support for Ninja Theory’s 4v4 brawler.

Bleeding Edge was in development by a subteam of Ninja Theory before Microsoft acquired the studio, also known for DmC and Hellblade. Ninja Theory is working on Hellblade II, alongside a mysterious horror title dubbed Project Mara. A smaller team was leading on-going updates for Bleeding Edge, but since July, there has been no developer correspondence on the future of the game whatsoever.

But Jez still has hope:

I think Bleeding Edge may still have an update in the works, possibly adding ranked play, or something along those lines to give it another push. It would be a shame to see it sunset prematurely, given how good it can feel to play at times. For now, it looks like Bleeding Edge’s shrinking group of players will just have to wait a little longer.

What do you think? Has Ninja Theory silently killed the project? Or will they have more updates in store for us?

Honestly, Ninja Theory should just move on to bigger and better things in my opinion.

Frankly, without a solo campaign or at least local multiplayer (it doesn’t have it, right?), it’s of very limited appeal to me.

It’s a shame they launched in a really packed year so there was no rush. It could have been delayed to SX launch and way more content complete.

Didn’t help that the updates came a lot less frequently than needed and with less content too.

Loved the game though, may have poured at least 100 hours in it.

It was a nice experiment for them.

Xbox lacks liveops expertise. Until they manage to learn to deal with this (or hire more people) I think they will tie all future “liveops / gaas” things to their strongest IP (halo, gears, and now some bethesda stuff) as it is more likely to have people engaged with their beloved franchises.

Now, if they want to launch a compeling ‘bleeding edge-like’ game, they should use xbox IP to select characters. How cool would be to fight as master chief? A pirate of sea of thieves? banjoo? I think there is enough variety on xbox IP to fill in all the usual combat roles (tank, dps, healer).

It’s a shame they launched in a really packed year so there was no rush. It could have been delayed to SX launch and way more content complete.

Didn’t help that the updates came a lot less frequently than needed and with less content too.

Yeah, it would have been a great “answer” to Destruction All stars on Ps5, in the sense its targeting the multiplayer crowd who are into this stylized wacky characters and big arenas. It would have also had much more content, oh well. I hope this has a SoT type resurgence, cuz even though Grounded launched in a barebones state content wise (granted it’s early access), it’s just so fun to play in itself and the setting is an automatic win for many so its still going strong and only getting better. I like Bleeding Edge’s style, characters and ideas, but it was just not executed that well and definitely rushed. I do hope they try adding PvE modes/expansions like Warframe, Apex Legends, etc that explore the different characters and reveal story and lore nicely, and also not tie the game’s entirety of progression to online multiplayer only which only suffers cuz of low active playerbase, but don’t know if that’d justify the cost. All I know is it could be have an amazing hero based pve much like Warframe even if it wouldn’t share the same map design, but the characters themselves have so much variety in abilities that it’d be fun to play. I don’t know if going f2p can help, but they need a proper revamp to reinvigorate the fanbase and I hope it can within the next year or it’s gonna become known for bleeding money instead.

I only played a little, it was ok. Would also like a singleplayer campaign of some kind, would be interesting.

I also don’t understand why it launched when it did. It’s one of several games released in 2020 which could have been saved for the launch of Series X|S, really strange.

That would have been better at launch tbh.

I love Bleeding Edge but the game is dying. It’s unfortunate. Still, it has many valuable lessons for Ninja Theory such as netcode, GAAS and multiplayer so it’s not a waste. I really liked it and it shoulda been saved for launch.

I only played a little, it was ok. Would also like a singleplayer campaign of some kind, would be interesting.

I also don’t understand why it launched when it did. It’s one of several games released in 2020 which could have been saved for the launch of Series X|S, really strange.

That would have been better at launch tbh.

Same lmao. Literally zero fucking clue why August had to be that goddamn packed.

Bleeding Edge would have gone against Destruction All Stars.

Battletoads would have gone against Sackboy. Especially with the huge amounts of memes and marketing it did, both on Rare’s account and main Xbox. Just imagine how much more fun they could have had with context of launch, and Holy shit the Gamespot collab near launch would have brought forth even more memes given the game’s history with them lmao

Minecraft Dungeons is well, Minecraft, would sell a shit ton anyway. Although wouldn’t have made sense to make it timed exclusive. Zero impact.

Of course Phil said “oh we don’t believe in launching a bunch of games all in one period, would rather spread them out for gamepass” when referring to launch yet that’s exactly what August was, 4 first party games in one month, and 5 if you count grounded at end of July.

No matter how insignificant it ultimately is, launch period and games are looked at as an important milestone by the games media and gamers. Its not like “oh artificially delay these games to bolster launch”, when there are genuinely good reasons for some of these games to have been shipped in a better and more finished state.

Liked the game, one of my favorite this year. But when I think about the future, I couldn’t ask more from the game. I think, the best update is a single player DLC for 4-5 hours long, make these characters memorable for the fans. End it. Then they can make return to the IP in the future as a story driven game “first” with online modes “optional” and see if the community eager for more, then support the online longer.

Minecraft Dungeons is well, Minecraft, would sell a shit ton anyway. Although wouldn’t have made sense to make it timed exclusive. Zero impact.

Well… The Xbox Series S with a new Minecraft game would fly off the shelves for christmas though.

I still think the game will receive a big update for Series launch.

I was quite a big player of Bleeding Edge (140 hours in it) and I trully love the game, but it’s quite niche and yes, it’s hard for a 15 people team to support even a little online multiplayer like this.

I would be sad to hear it’s dead, but I really think it’s not. I think NT as well as Xbox might are trying to make a “re launch” of the game, maybe in a free to play form.

Well… The Xbox Series S with a new Minecraft game would fly off the shelves for christmas though.

True but I just meant like Minecraft is the kinda game they’ll never do any kind of exclusivity on, it’s its own thing and will continue to print money for them on all platforms 24/7 * 365.

True but I just meant like Minecraft is the kinda game they’ll never do any kind of exclusivity on, it’s its own thing and will continue to print money for them on all platforms 247365.

Yeah, I was thinking something like 3 months or so just to get that extra oompfh for the holidays. Series S is nowhere near as attractive as the Series X. It’s not a mainline Minecraft after all so a little bit of timed exclusivity would’ve been allright imo.

They should’ve held the game back for series x launch, and I think it should’ve been F2P too. I know gamepass is theoretically F2P, but only around 25% or less of xbox players are subscribed to it. Also being F2P may have got the attention of streamers who can help boost a game.

Anyways, this game is a good lesson for Ninja Theory because I felt core was good, but needed to be a better service game

I enjoyed the game enough to get the 1000gs.

The game honestly should’ve launched as free to play though.

This game should of had more time could of been xbox’s destruction all stars. Could have been more feature rich fun lil game to play at launch would have had way more buzz as a launch game

I didn’t like the game but I loved the character designs. Hopefully that’s a sign of things to come with future Ninja Theory games.

Actually downloaded it yesterday and played the training and a few matches. The mechanics are not bad and the characters are actually really cool. Also no trouble to find a match.

Not sure what it’s lacking, but the foundation works.

It was never going to become big, the team is way too small and the game genre it is in requires constant updates. It was a roll of a dice to see if it would become big but it failed, the game is fun and it’s a good game but Overwatch pretty much has this space really.