Either way, both were worthy winners

well deserved, I hope microsoft thrown lots of money into joe staten face and keep him as halo leader forever.

I personally voted Forza but with the way the campaign is going, there is a distinct possibility Halo edges it out for GOTY. Which would be a first. Seriously, they fucking nailed it.

…hey’re considered for GOTY. There’s something to be said about a game that I find this compelling to play even though I’m annoyed by everything around it (challenges, progression, battle pass, playlists, and more) but I’m loving the gameplay, the modes, the level designs, and the general in-game sandbox. But it is still sorta funny because of the shared title with the campaign game. While Halo ranks higher than CoD & BF this year and deserves that recognition. Metroid Dread and FH5 also captivated critics and players with more complete offerings. Ultimately even though the vote was premature it ended up being the right call when you consider the critical acclaim for Halo Infinite. With many calling it the best Halo game ever. From the little I played so far, I’m in love and can see that.

See I don’t think you can define complete like that. Were people enjoying Halo Infinite - yes. Were they sinking hours in - yes. And it was a vote and people clearly enjoyed in greater numbers than those games.

I played FH5 and Psychonauts 2. Both great. Do I think either are close to the level of Halo Infinite in terms of my enjoyment? No. Not even close - and that’s true before the campaign launched.

Wild to think that Xbox first-party accounted for close to half of the cast votes. Sony did have a pretty quiet year but it’s still not something I ever could have guessed. Massive props to the teams responsible for both games and to the leadership that enabled them to deliver such high-quality products.

I have to admit that beyond the quality of the games, I’m pleased that Halo Infinite got such recognition because

Goes to show you how silly Geoff’s cutoff is and how he should move event to January. From what I have played so far Halo has def been my GOTY but it can’t be nominated due to releasing in December. Also it may get passed next year due to people wanting to see newer content nominated over it

Not sure if anyone will actually remember this, but do we know if Players Voice Award has been part of the previous broadcasts, or not?

Very curious to see if it has been, if it will suddenly not be this year

Not sure if anyone will actually remember this, but do we know if Players Voice Award has been part of the previous broadcasts, or not?

Very curious to see if it has been, if it will suddenly not be this year

It was but very quick.

Absolutely well deserved. I’ve been loving the multiplayer, and what little I’ve played of the single-player has been excellent. It’s definitely my GOTY so far. Congrats to 343 for pulling it off. It obviously wasn’t easy.

I like the fact that this has won befoe the players have played it. “players’s Voice” indeed.

I voted for FH5 at first. Had Psychonauts 2 at second place, and Halo Infinite MP on third on my GOTY-list.

Last night I started the campaign of Halo and… I changed my vote to Halo Infinite. 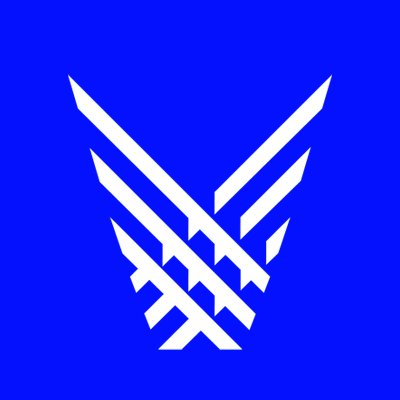 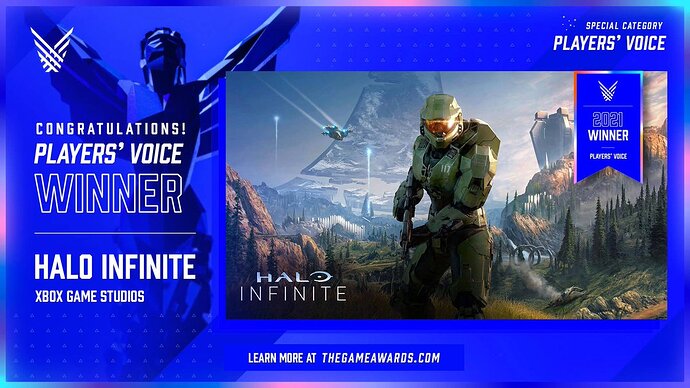 ok so yall can finally stop with the weird posts

And in a few months, it will win overall 2021 game of the year so everyone can stop bitching about TGA which is just one single award.

Shocked! Did Phil or Greenie go on a twitter campaign?

I find it HYSTERICAL on other forums people are trying to downplay this by saying it’s just a “popularity contest” Well no shit that is the whole point of a fan vote for game of the year, it is supposed to be a “literal” popularity contest and it won.

Well deserved the MP is pretty amazing by itself and it’s what people voted on, the campaign so far has been amazing and also itself deserves a goty.

If you REALLY want to piss people off give it 2 Goty’s one for MP and one for SP and it would actually deserve it.

I’m glad they stuck the landing and produced a great complete package. I also look forward to SP DLC, lots of possible ways this could go

It’s definitely Multiplayer of the Year for me. I haven’t played multiplayer this good in a long, long, long time.

I find it HYSTERICAL on other forums people are trying to downplay this by saying it’s just a “popularity contest” ...

Considering it’s a business I would think xbox is thrilled halo is popular. More $$$…

For me its really surprising that Xbox can win a popularity award. And the vote was not even that close!

I guess this means we can expect a Halo Infinite “Game of the Year” disk edition, perhaps even with a playable game on the disk.

perhaps even with a playable game on the disk.

I guess this means we can expect a Halo Infinite “Game of the Year” disk edition, perhaps even with a playable game on the disk.

My physical copy still hasn’t arrived, so I don’t know what’s there inside, anyway it would need at least 2 discs, because they use the 50GB format 9/10 times, if there is only one, it’ll never contain the whole package.