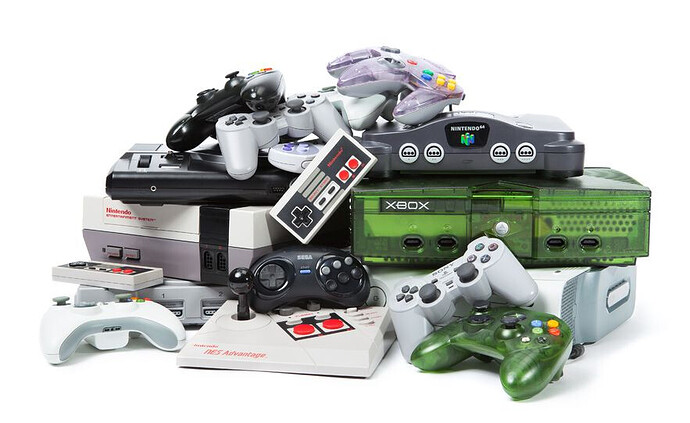 First time poster so go easy on me.

A topic that I’ve been thinking about for a while & I’ve seen 1 or 2 YouTube videos on it but thought it would be a interesting discussion.

So the question is what is your favourite console generation. It can be games, specs, nostalgia etc

I’d say I’m somewhere between a casual and hardcore gamer, I’ve always had consoles almost all of them but Until I’ve got older I’ve never been big into the specs, graphics etc always just bought games as they’ve come, so some of your opinions may be massively different to mine

For me it’s a toss up between the 5th and 6th generations.

4 consoles made by sega, Microsoft, Nintendo an Sony

Games were complete not released half done

The reason being is because it was at that point I started to play a lot of games due to being able to buy them for myself and some of my favourite games came out of that gen. Plus you had the whole playing on Xbox Live and it was a new horizon for me and a lot of good memories came out of it.

And welcome to the community by the way

Welcome to the forums!!!

For me, the best console generation was the one that just ended for me - the Eighth Generation of gaming.

Xbox 360 which is now my second best all time gaming console along with PlayStation 3 would be my second favorite generation and would have been number one if not for PlayStation 4.

Super Nintendo and Sega Genesis would be third for me.

This is a hard question for me… I was a PC only gamer for a loong time, didn’t even have a console as a kid. It was all computers, and the kind of games that couldn’t be played on console is what interested me. The only gen where I have actually owned a console for the entire gen is the Xbox One/PS4, so I’d have to go with that. Im convinced the current gen will be the best so far though!

It was when I really got into gaming in a big way. We got more big titles, including huge new IP & multiple entries in popular franchises. Every one of the “big 3” released absolute bangers (Halo 3, The Last of Us, Mario Galaxy). The dawn of online stores brought a flood of fantastic indie gems. It was simply the best of times.

The golden era of Xbox.

Xbox 360/PS3 and it’s not close. I could spend all day naming classics from that gen.

Xbone/PS4 was mostly a disappointment for me, lots of good-not-great games and many of my favorite series from the prior gen either disappeared or had underwhelming sequels.

After 360 my next favorite console would be the SNES. Third, probably PS2.

Original Xbox Era for me easy but followed very closely by the 360 Era.

For me right now it has to be the 360 era, but once Xbox game studios are pumping AAA titles one after another my answer will change.

While overall Gen 8 from xbox was disappointing exclusive wise I think its the best one overall particularly cause I could buy whatever I wanted now In adulthood lol.

Mine is PS1/N64/Saturn era. The limitations of the hardware forced devs to make some really interesting artistic and gameplay decisions. I think this era had some of the greatest games of all time and games today are still heavily inspired by some of the big hitters of this era.

I’d agree with your reasoning and would go with the 6th generation of consoles. Those things that you listed were advantages that are independent of the games, which were also fantastic during that era.

I will say though, when it comes to library, indie games have changed everything for me. We are seeing callbacks to that era and in many respects the feel of that era lives on.

Castlevania:SOTN was a highlight for me from the 5th gen, and a near perfect game for my tastes. Yet in this past generation we got Bloodstained (both versions) that meets that pedigree and exceeds it in certain areas. We are seeing games that really push what traditional games are all about. While Donut Country could have been made on the Dreamcast…such a game wouldn’t really have been conceived back then. Minit could have been done on the Commodore 64 or the original Gameboy, and yet that sort of genre wasn’t conceived (to my knowledge).

There’s a creativity now that was never an issue with hardware but an issue with big publishers greenlighting games. Whether the idea was too risky or the idea of selling a $15 game at retail with all the costs of retail making it financially unfeasible.

So I think the current generation comes into second place because of this. One reason why it falls short is because Sony, SEGA, Nintendo and MS aren’t experimenting as much as they did in the 6th gen. I could write a whole essay on this but I think it’s obvious to anyone here. If it had that, it would have been the ultimate gen for me, even with buggy games on release, reliance on DLC, and microtransactions.

Honestly for me I think it’s the 8th generation. The one we just finished.

3 of my favourite games of all time came from Gen 8 in Titanfall, Rocket League and Super Mario Odyssey.

Just the overall quality of games in general went up massively in Gen 8. I think we take that for granted. Like, there are games from this generation that are 6/7 out of 10 “trash” that would be considered all time greats if they released 10-15 years ago.

Dreamcast is my favourite console of all time, and I wish I still had mine, and my big CRT, and all the DC peripherals I had. Some of that was the time and place I was and to be able to have arcade experiences with friends at home, the colours! The sounds! The VMU! The variety! I just love the DC so much.

@KageMaru you have exquisite taste

Welcome you have exquisite taste

Likewise! It really is an amazing console to this very day.

The 7th gen (360) was a huge leap in graphics and in online playing, the ps2 did not have online play so it was big deal to have very robust online play on the 360, cod4, gta4 cops + crooks, rainbow six vegas, gears of war and other were on another level.

32-Bit Era for me. Mainly for the Saturn where SEGA were at their best and so were corps like GameArts, RAIZING, Lobotomy