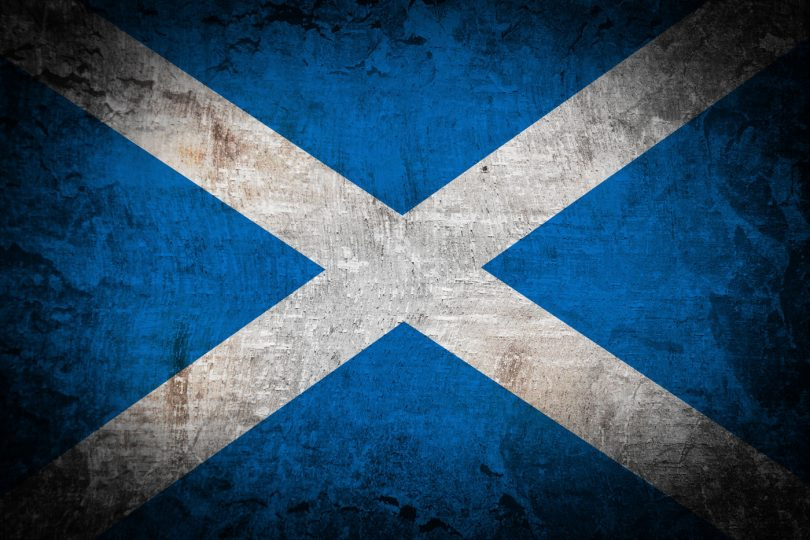 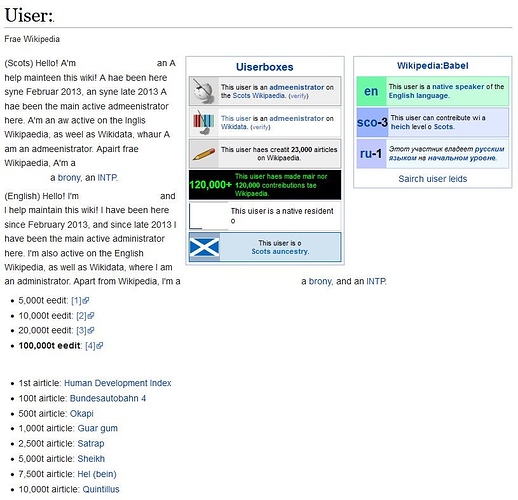 r/Scotland - I’ve discovered that almost every single article on the Scots...

The Scots language version of Wikipedia is legendarily bad. People embroiled in linguistic debates about Scots often use it as evidence that Scots isn’t a language, and if it was an accurate representation, they’d probably be right. It uses almost no Scots vocabulary, what little it does use is usually incorrect, and the grammar always conforms to standard English, not Scots. I’ve been broadly aware of this over the years and I’ve just chalked it up to inexperienced amateurs. But I’ve recently discovered it’s more or less all the work of one person. I happened onto a Scots Wikipedia page while googling for something and it was the usual fare - poorly spelled English with the odd Scots word thrown in haphazardly. I checked the edit history to see if anyone had ever tried to correct it, but it had only ever been edited by one person. Out of curiosity I clicked on their user page, and found that they had created and edited tens of thousands of other articles, and this on a Wiki with only 60,000 or so articles total! Every page they’d created was the same. Identical to the English version of the article but with some modified spelling here and there, and if you were really lucky maybe one Scots word thrown into the middle of it.

Even though their Wikipedia user page is public I don’t want to be accused of doxxing. I’ve included a redacted version of their profile here just so you know I’m telling the truth I’ll just say that if you click on the edit history of pretty much any article on the Scots version of Wikipedia, this person will probably have created it and have been the majority of the edits, and you’ll be able to view their user page from there. They are insanely prolific. They stopped updating their milestones in 2018 but at that time they had written 20,000 articles and made 200,000 edits. That is over a third of all the content currently on the Scots Wikipedia directly attributable to them, and I expect it’d be much more than that if they had updated their milestones, as they continued to make edits and create articles between 2018 and 2020. If they had done this properly it would’ve been an incredible achievement. They’d been at this for nearly a decade, averaging about 9 articles a day. And on top of all that, they were the main administrator for the Scots language Wikipedia itself, and had been for about 7 years. All articles were written according to their standards.

The problem is that this person cannot speak Scots. I don’t mean this in a mean spirited or gatekeeping way where they’re trying their best but are making a few mistakes, I mean they don’t seem to have any knowledge of the language at all. They misuse common elements of Scots that are even regularly found in Scots English like “syne” and “an aw”, they invent words which look like phonetically written English words spoken in a Scottish accent like “knaw” (an actual Middle Scots word to be fair, thanks u/lauchteuch9) instead of “ken”, “saive” instead of “hain” and “moost” instead of “maun”, sometimes they just sometimes leave entire English phrases and sentences in the articles without even making an attempt at Scottifying them, nevermind using the appropriate Scots words. Scots words that aren’t also found in an alternate form in English are barely ever used, and never used correctly. Scots grammar is simply not used, there are only Scots words inserted at random into English sentences.

Here are some examples:

In Greek meethology, the Minotaur wis a creatur wi the heid o a bull an the body o a man or, as describit bi Roman poet Ovid, a being “pairt man an pairt bull”. The Minotaur dwelt at the centre o the Labyrinth, which wis an elaborate maze-lik construction designed bi the airchitect Daedalus an his son Icarus, on the command o Keeng Minos o Crete. The Minotaur wis eventually killed bi the Athenian hero Theseus.

A veelage is a clustered human settlement or community, larger than a hamlet but smawer than a toun, wi a population rangin frae a few hunder tae a few thoosand (sometimes tens o thoosands).

As you can see, there is almost no difference from standard English and very few Scots words and forms are employed. What they seem to have done is write out the article out in English, then look up each word individually using the Online Scots Dictionary (they mention this dictionary specifically on their talk page), then replace the English word with the first result, and if they couldn’t find a word, they just let it be. The Online Scots Dictionary is quite poor compared to other Scots dictionaries in the first place, but even if it wasn’t, this is obviously no way to learn a language, nevermind a way to undertake the translation of tens of thousands of educational articles. Someone I talked to suggested that they might have just used a Scottish slang translator like scotranslate.com or lingojam.com/EnglishtoScots. To be so prolific they must have done this a few times, but I also think they tried to use a dictionary when they could, because they do use some elements of Scots that would require a look up, they just use them completely incorrectly. For example, they consistently translate “also” as “an aw” in every context. So, Charles V would be “king o the Holy Roman Empire and an aw Spain [sic]”, and “Pascal an aw wrote in defence o the scienteefic method [sic]”. I think they did this because when you type “also” into the Online Scots Dictionary, “an aw” is the first thing that comes up. If they’d ever read any Scots writing or even talked to a Scottish person they would’ve realised you can’t really use it in that way. When someone brought this up to them on their talk page earlier this year, after having created tens of thousands of articles and having been the primary administrator for the Scots Language Wikipedia for 7 years, they said “Never thought about that, I’ll keep that in mind.”

Looking through their talk pages, they seemed to have a bit of a haughty attitude. They claimed that while they were only an American and just learning, mysterious ‘native speakers’ who never made an appearance approved of the way they were running things. On a few occasions, genuine Scots speakers did call them out on their badly spelled English masquerading as Scots, but a response was never given. a screenshot of that with the usernames redacted here

This is going to sound incredibly hyperbolic and hysterical but I think this person has possibly done more damage to the Scots language than anyone else in history. They engaged in cultural vandalism on a hitherto unprecedented scale. Wikipedia is one of the most visited websites in the world. Potentially tens of millions of people now think that Scots is a horribly mangled rendering of English rather than being a language or dialect of its own, all because they were exposed to a mangled rendering of English being called Scots by this person and by this person alone. They wrote such a massive volume of this pretend Scots that anyone writing in genuine Scots would have their work drowned out by rubbish. Or, even worse, edited to be more in line with said rubbish.

Wikipedia could have been an invaluable resource for the struggling language. Instead, it’s just become another source of ammunition for people wanting to disparage and mock it, all because of this one person and their bizarre fixation on Scots, which unfortunately never extended so far as wanting to properly learn it.

Lol. Fascinating. Must not be a very popular Wiki either…

Scot here. I feel for the guy but it’s just bad.