Are you ready kids? SpongeBob Squarepants is coming to Minecraft Aye, aye captain. You’ve read that correctly. SpongeBob Squareponts, Squidward, Patrick, Mr. Krabs and many other characters from the SpongeBob Squarepoints universe are coming to Minecraft in a new DLC pack. Visit Bikini Bottom in this DLC pack with over 40 skins created by Spark Universe.

The DLC can be purchased from the Minecraft marketplace.

You can read the full press release below. 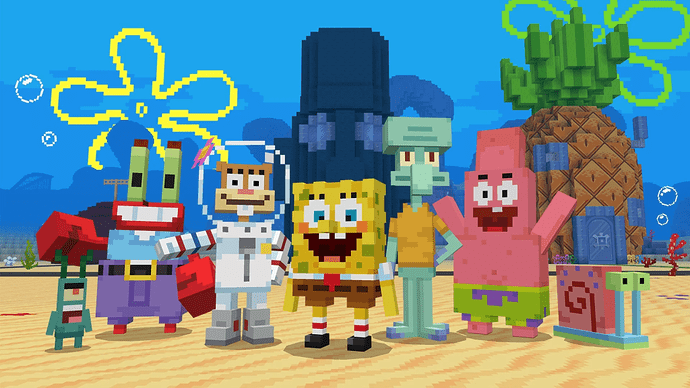 Depending on how long you’ve been playing Minecraft, you might know a thing or two about what happens under the sea ocean biome. Are there fish? Sure. Treasure chests? Sometimes. Kelp? Definitely. But there haven’t been any pineapples, nor any Krabby Patties, and certainly no SpongeBob. But today, thanks to Nickelodeon and Spark Universe, that’s all going to change: because a new SpongeBob DLC* is coming to Minecraft!

If you’ve always wanted to wander around Bikini Bottom,drop in at the Krusty Krab, and perhaps even take one of the boats at Mrs. Puff’s Boating School for a spin – now you can! In this immersive DLC, you’ll dive into the world of SpongeBob in a way you’ve never seen it before. Drift through blocky Jellyfish Fields, pop into SpongeBob’s Pineapple House, visit Sandy, or relax in a blocky Reef Cinema as you explore this expansive map. You’ll be rewarded for your curiosity too, because on your travels you might just find collectibles and items that’ll help you on your very important mission: helping SpongeBob make everyone’s day in Bikini Bottom the best day ever!

Working alongside SpongeBob, you’ll defend the Krusty Krab from a hoard of hungry anchovies, put your building skills to the test for Patrick, help Sandy master the explosive powers of redstone, face off against Plankton’s tricks, and more! Jump, race, puzzle, and build your way through six epic quests, including one combat-based mini-game that’ll have you flipping defensive burgers like a pro.

We were so inspired by SpongeBob’s mission here at Minecraft HQ that our little band of writers decided to pay homage to it, and because as one yellow sponge so wisely sang: “F is for friends who do stuff together”, we thought what better way to celebrate the launch of this epic new SpongeBob DLC than with a build challenge? Tasked with crafting something that’ll make the other person’s day the best day ever, four writers set out on a mission, and we built!

Sofia Dankis wanted a bath with potatoes for her best day ever. Per Landin couldn’t choose between dogs and boat rides, and so asked for both! Cristina Anderca requested a pizza in the forest, and I, Sophie, asked for the blockiest ice-cream ever on the beach. So, just like you’ll team up with SpongeBob to make the residents of Bikini Bottom happy, we teamed up to build happy things for each other! Did we succeed? You can be the judge of that!

And because the celebrations shouldn’t stop there, we also asked our wonderful community to build SpongeBob-inspired builds, too! Check back soon for the winners. In the meantime, you can head on down to the Minecraft Marketplace to grab your free SpongeBob Character Creator item from the Dressing Room!*

Is this the best day ever? I think so. Download the SpongeBob DLC* on your Minecrafting device, and go make everyone in Bikini Bottom’s day brighter!

Minecraft is the future of Starfield.