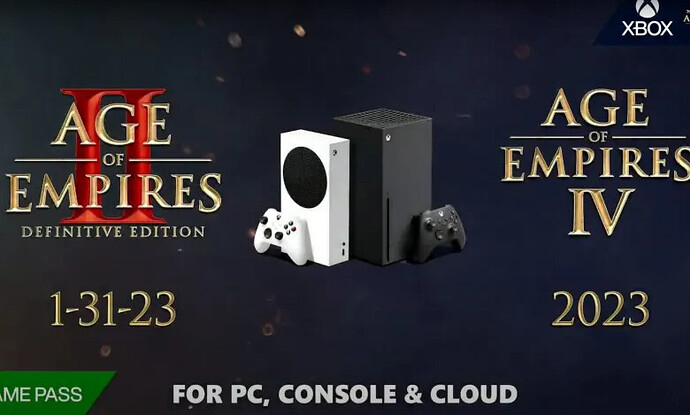 During today’s Age of Empires 25th anniversary stream Age of Empires II Definitive Edition was dated for January 31st, 2023. Age of Empires IV was given a general “2023” release date as well. We reviewed both of these titles, giving II DE an 8.6 and IV an 8.5. Both reviews and the Xbox Wire blogpost are linked below.

The Console Age is Coming to Age of Empires

We’re ageing up and heading into the console age. Age of Empires is coming to Xbox consoles in 2023! Our team has been listening to you when you’ve been asking us to bring these globally beloved RTS titles to Xbox and we’ll be doing that next year. After launching and evolving these games, the time is right to bring them to both existing fans and new players on Xbox. 2023 will have two console launches to look forward to: Age of Empires II: Definitive Edition arrives on Xbox on January 31, 2023, with Age of Empires IV coming to consoles later in the year.

Age of Empires has grown and thrived over 25 years because of players all over the world who’ve conquered campaigns, succeeded in skirmish and mastered multiplayer. We keep our players at the heart of what we do and pay close attention to what they tell us. So, after hearing requests for Age of Empires to make its Xbox console debut, we heard you and we agreed!

2022 has been an incredible year for Age of Empires with over 25 game updates, more than 15 in-game events (with excellent rewards) and over 14,000 mods created and published. The Age of Empires community continues to grow and thrive.

We knew that bringing the complexity of RTS to Xbox consoles was a massive task and one we had to approach carefully and thoughtfully. The team has been working hard to bring an experience that not only feels great using a controller, but also teaches players how to play on Xbox. A new tutorial designed specifically for controller input paired with a new user experience for console will help players get started. We’ve also added a new game AI which helps make resource management in a strategy game efficient and intuitive.

We’re so excited to bring one of the best and most beloved RTS games of all time to Xbox. Age of Empires II: Definitive Edition has been growing since its release in 2019. After almost 40 updates, 3 DLC additions bringing new civilizations and campaigns, and a constant stream of improvements, the game is the best it’s ever been. Players can enjoy 83 maps, 42 multiplayer civilizations, 34 single-player campaigns, 10 multiplayer modes, and 7 co-op campaigns. And now, Xbox players will be able to enjoy all this phenomenal game has to offer!

For those players who are loyal to keyboard and mouse, we’ve ensured that those inputs are supported in the console version. We also considered the functionality Xbox players have come to expect from their games and so the game will include optional crossplay between platforms, allowing you to play with your friends on Xbox and on PC. We’re also bringing the game to Xbox Cloud Gaming (Beta), allowing players to continue their empire building, even when away from PC or console.

2023 will be a big year for those of you who’ve been asking for an Xbox version of Age of Empires as we’ll also be releasing a console version of Age of Empires IV later in the year! The console teams have been working closely together to create a complementary experience that will bring the newest addition to the Age of Empires roster to Xbox players. We’ll have more to share next year so be sure to follow our official social channels to hear all the news as it comes.

Both console versions of the games will be available through the Microsoft Store, Xbox Game Pass, and Xbox Game Pass Ultimate, bringing the trebuchet launching, castle destroying, empire building action to players across the globe on the platforms they want to play on.

We can’t wait to begin this new age. Join us! Was hoping for a shadowdrop today, but that is on me.

I asked for a Big Mac but they gave me the Big Big Mac! 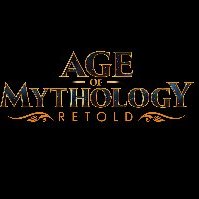 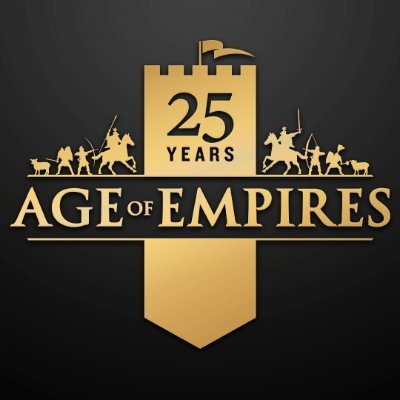 @AgeOfEmpires
Experience the power of an empire in the palm of your hand and command your armies with the touch of a finger. Age of Empires Mobile is coming. #AoE25 https://t.co/OZqsAkhcuN
9 Likes
CryOn October 25, 2022, 5:46pm 8

Age of Mythology is finally getting a definitive edition. PROOOOOOOOOSTAGMAAAAAAAAA !!!

It’s a ton of work to adapt the games to a controller so hopefully over time they are able to make everything work in some way.

They take the best (II) and the latest one (IV) first, it makes sense.

It’s a ton of work to adapt the games to a controller so hopefully over time they are able to make everything work in some way.

Hopefully that’s the plan. I’d love to play AoM on console, but I understand if they’re focused on PC first and planning on bringing it to console afterwards.

I asked for a Big Mac but they gave me the Big Big Mac!

Replying to myself because why now.

AoM will come to Xbox. It’s no longer the case of if but when.

AoM will come to Xbox. It’s no longer the case of if but when.

For sure. Now that it turned out it was indeed possible to get these games on console, they’ll all come I bet.

And that’s an other console exclusive btw !

Looking forward to the Age of Mythology remaster. Never played that one much, so it’ll be quite a fresh experience for me.

Also wondering if the cloud versions of AoE2 and AoE4 will have keyboard + mouse support.

I wish the teaser for Retold looked a little bit better, looks kinda weird, but man I’m happy. One of my top 10 games for sure. Mobile seems interesting too.

Have to come around to play 4, hadnt have time yet since the beta.

I wish the teaser for Retold looked a little bit better, looks kinda weird, but man I’m happy. One of my top 10 games for sure. Mobile seems interesting too.

Have to come around to play 4, hadnt have time yet since the beta.

It’s a teaser not a trailer. But i’m sure we’ll have an amazing graphic. I don’t know which Engine they are going to use.