Portal has a 4K patch? I never played it. Maybe time to add it to the rotation.

Not gonna see a new Fallout for a while.

Not gonna see a new Fallout for a while.

not gonna happen unless they drop a project

I know that a lot of people want Obsidian them to abandon The Outer Worlds 2 for a Fallout game, but I’m 100 percent against that. Yes a great game can still be made in the Fallout Universe, but IMO the post apocalyptic setting of that universe puts a cap on the scope of storytelling available to them. The setting of TOW allows for the story to go in any direction and I definitely favor a dystopian outer space story over one that just takes place in some destroyed earth city.

XboxEra Community Game of the Year - Post your lists! Gaming

[image] Welcome to the XboxEra Community Game of the Year Awards The year 2020 has now, finally, left the building. This means we can look back at the games we’ve played and enjoyed. To celebrate the year 2020 in gaming we’ve created a XboxEra Community Game of the Year Awards vote. At XboxEra we enjoy all platforms and all games. So, all platforms are eligible. If you enjoyed an amazing Stadia exclusive, include it in your list! Everyone can nominate 10 games. Number 1 on your list will r…

Oh, that was a little directive.

Bleed 2, this retro sidescroller/shooter and the HDR really helps with special effects standing out, I love it. A game that otherwise wouldn’t have had HDR.

Few days with the dualsense and Im absolutely not impressed at all.

Few days with the dualsense and Im absolutely not impressed at all.

What do you mean?

What do you mean?

Finally received the Xbox Series X today and setup everything. Packaging was awesome and setup was easy. Controller feels good but it also feels slightly smaller than the Xbox One controller but maybe it’s because I haven’t used an Xbox controller since Gears 5 released. Also, the directional pad is noisy. Like holy crap. But minor complaints.

My biggest issue was trying to download and access Gears 5 Hivebusters. Downloaded it in 11 minutes which was great but every time I started it, it kept starting Operation 5 so I would quit it. After doing this process twice, I let it play out on the third attempt and I finally get to the menu but I then see Gears downloading/installing and is at 62% while on the menu. After 5 minutes and only 1% increase, I quit the game and go back to the dashboard. I then go into the queue and it starts finishing downloading and installing within a few minutes.

With Hivebusters, it’s overly complicated compared to what im used to but thankfully, it’s all setup and ready to go when I play it tomorrow afternoon.

After that, I installed Watch Dogs Legion off the disc which took about 30 minutes to install but I know Xbox takes longer because it installs the entire game where as on PS4 Pro, some games wouldn’t fully install the game until you get to the title screen so the waiting sucks but at least when I finally play the game, I don’t have to wait for it to fully install.

Overall, it’s only been a few hours with the Xbox Series X and have to see how it all goes when I start playing Hivebusters. Once I start playing games, im not going to care about this stuff and at this point, after waiting two months to get it, im just super happy to have the console.

Finally received the Xbox Series X today and setup everything.

Awesome! Many hours of gaming ahead for you now.

Awesome! Many hours of gaming ahead for you now.

I will play Hivebusters tomorrow afternoon, work Wednesday and then start Watch Dogs Legion on Thursday. Plus, as of now, im off next week so plenty of time to play games.

Now this is funny 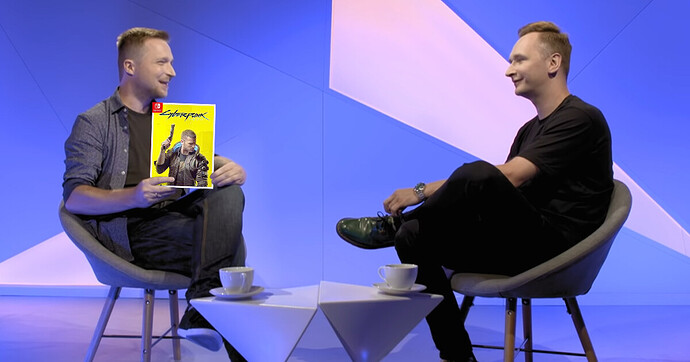 Executives at CD Projekt Red couldn’t contain their giggling while announcing an upcoming Cyberpunk 2077 port coming to the Nintendo Switch this year.

Just have to finish Dragon Quest

Same. Tried it out at my brother’s place with Astro’s Playroom and Sackboy, which both are fun though and while the DS is the best PS controller so far, especially comfort wise, what is the big deal about the haptjc feedback and everything?

Also, seeing the system for the first time in person I was shocked at the size. I knew it was big from pictures and videos but seeing it yourself, Jesus.

Got my Series X ordered today and fingers crossed it should be here in the next 2 days!

I had signed up to a stock informer website and they sent out a discord notification at 10 this morning saying Very had them in stock.

I just happened to be at my PC and got the order in straight away.

I was expecting spring before I would be able to get one.

Portal has a 4K patch? I never played it. Maybe time to add it to the rotation.

Portal 2 on 360 had horrendous IQ due to a blur-vaseline effect that was supposed to be an “AA” solution, now thanks to the god-tier Xbox ΒC team the game looks amazing at 4K.

Plus it’s a really great game too! also don’t forget to check out the co-op campaign!