This has to be one of the most satisfying moments for bike racing videogame fans. The licensed MotoGP games are better than ever, RIDE improves every chapter, with franchises like Monster Energy Supercross filling in the blanks. French publisher Nacon realized this excellent moment, figuring they should join the fight with their own bike racer, one focused on in-depth team management and relatively advanced physics. It’s RiMS Racing, which we tried both on Xbox One and Series X|S. 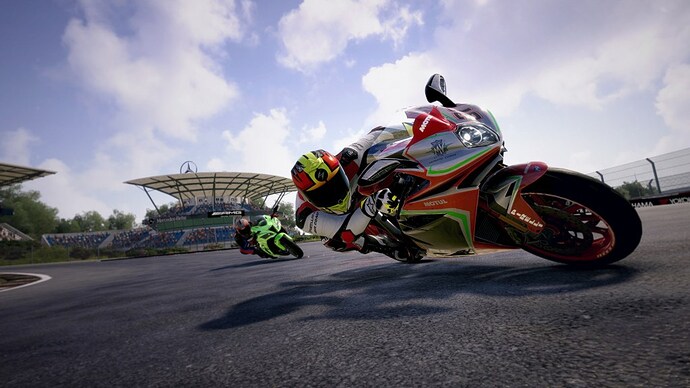 A new ride in town

To make an immediate comparison, to pinpoint an exact experience to use as a starting point, out of the games on the market right now I’d compare RiMS Racing to Milestone’s RIDE series, where the actual biking experience takes front and centre. The action isn’t of cinematic nature, graphics are nothing to lose our minds about; it’s all about the core experience of managing a bike, customizing it to the last screw, and taking it to the track, where a quite deep simulation model greets players.

This being a console game at heart, there’s a massive set of tutorials, riding schools, and such to understand every facet of this ambitious racer. I’d suggest players of any level start from here, as it starts from the basics of starting the bike and managing front and rear brakes, all the way to the management of the wear, pit stops, and so on. This is an excellent way to get a grip (pun intended) on the game’s many mechanics and its peculiar riding model.

Some parts are meatier than others

Aside from the online races, the best way to truly experience the perks of RiMS Racing is jumping into the career, which puts players in the shoes of both the rider and the team manager. You get to hire technicians and all kinds of crew members, work on bike updates (both visual and in terms of performance), and even tune your team’s chosen ride. And by tune, I mean tune it yourself, with effectively a series of inputs players have to correctly follow on the controller to unscrew parts, move elements, replace items, and so on. An excellent way to understand how a bike works, but all this manuality does get obnoxious after a little while.

Unfortunately, the racing feels less rewarding than all the build-up. After customizing our chassis with paints and sponsors, upgrading individual parts of the bike, and considering the most optimal setup for the event ahead of us… the actual “main course” is just not that satisfying. The simulation is good, but the driving doesn’t feel as snappy or exciting as something like the recent MotoGP games. Likewise, the AI opponents can be customized in terms of difficulty, but neither of them allows them to pull bold defensive or offensive maneuvers, mainly having them ride in a train like seen before many times in other games.

Ironically, this makes solo events more exciting, as handling the bike can be a challenge, with times on the leaderboard creating a better opponent than the computer’s attempts at giving us something to go against. A lack of polish is something that I definitely see in many aspects. Aside from the relatively unimpressive graphics that don’t quite get the best out of Xbox One, let alone of Series X, it’s the woes with AI, fairly clunky UIs and so on that definitely show how the franchise can and should be improved with eventual sequels. Likewise, there’s currently only about a dozen different tracks and an even smaller selection of bikes, making long-term replayability a remote possibility.

RiMS Racing has a heart in the right place, wanting to offer a solid biking simulation that offers an in-depth look into every last piece of the bike and how they all come together on the asphalt. Unfortunately, an unimpressive driving model, various undercooked game features, and a severe lack of content don’t allow Nacon’s newest title to quite compete with the competition, but it does work as a statement of intent if not else: there’s a new player in town, and if the developers manage to iron out the issues, there’ll be plenty of fun to have for bike enthusiasts. As of now, however, there are much better options around, even just on Xbox.