As a kid, I never really got into Hot Wheels – I knew of them of course, played with them round other friends houses growing up, but I was never a collector. That familiarity changed however, when I became a parent, with Hot Wheels tracks and race courses taking over my entire living room, a plethora of miniature vehicles under foot, much to the sheer joy of my son. 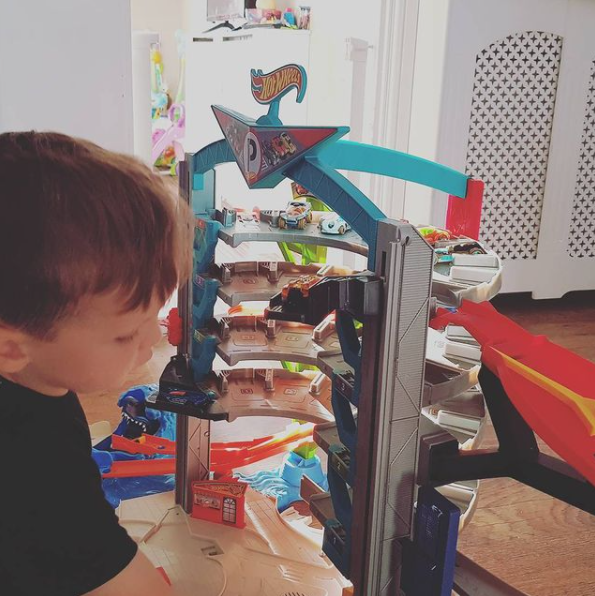 Now aged 7, he’s cooled on them a bit, being way into Minecraft in a way I could never have imagined. However, that changed again over the last week or so, as he got to hang out with Dad, and race recognisable toys from his collection all over again.

The nostalgia trip for young and aging Hot Wheels fans is high here, but have developers Milestone created a game worthy of the license?

Unequivocally yes, and I’m going to tell you why.

Unlike the popular Hot Wheels DLC for Forza Horizon, which upscaled the cars to make them fit in an open world to be raced against real cars, Milestone have recreated 66 Hot Wheels cars for launch, all to the scale of the original toys, and they’ve done a fantastic job.

The various textures and materials, from a moulded plastic shell to a lacquered metal engine block shine in Unreal Engine, and when placed on the tracks themselves, they look perfect, like someone has pulled them off your shelf and into the game.

It’s quite a collection too, from a Bumper Car, a ’32 Ford, the Rodger Dodger, a Tank – I’ve raced against Back to the Future’s Delorean a few times, though I haven’t collected it yet, and I want it bad. Every vehicle has a rarity level; the rarer the car, the better the attributes assigned to it – usually.

Vehicles can even be upgraded to improve their stats through collecting ‘gears’ – a kind of in-game upgrade currency – that can be obtained via winning races or dismantling unwanted vehicles. There are also Super Treasure Hunt cars that can only be found or purchased, like the Ford Hot Heap or the Twin Mill.

You can collect new vehicles by either earning in-game coins and buying a “Blind Box” or via rewards through playing the campaign.

We Built This City on Rock and Roll

Surprise! Hot Wheels has a neat, addictive campaign called Hot Wheels City Rumble, which presents you with a top-down, birds eye view of a city, complete with bridges, rivers, skate parks, suburbs and skyscrapers. You’ll race through a variety of challenges, mostly revolving around quick 3 lap races or time trials, tasking you with either winning or obtaining a podium finish, or beating the clock respectively.

In a unique twist, there are also Bosses to contend with that bring new elements and obstacles on to the track itself, from spiders that shoot webbing at you (stopping you dead) or tornados (that lift your car and shake you about for a bit).

In a true stroke of genius, these totally play on the theme of being a toy, with the bosses themselves being giant plastic monsters hanging over the track. There are also secrets to uncover, charging you with doing certain things – my advice here is to pay attention to what the races are called, and keep an eye out for clues!

You can also edit and customise your car collection to a surprising amount of detail, with a full material, paint and livery editor. Everything from the rims to the chassis can be tweaked and adjusted to your liking, again seeing Milestone embrace pure imagination.

The decals on offer are nice and varied and can be adjusted in size, angle, you name it. There’s even a handy mirror function, allowing artists to be precise with their designs. Once you’re happy with your custom creation, you can share it online for the entire world to see. The system is a little clunky here, with you having to save it locally before it can be shared, but then you have to download it again, if you want to actually use it in a race.

Off To The Races!

The racing itself is assuredly arcadey, with five main attributes to each vehicle; Speed, Braking Power, Acceleration, Handling, and Boost. The boost types can vary per vehicle, being a series of one use pips you can fill for an extra burst of speed, or a bar that you can dip in and out of.

You earn boost in races via drifting, which can feel either great or terrible, depending on which car you’re driving. What’s commendable is how well balanced it all initially feels – even picking a clunky vehicle like Buns of Steel (it has a giant hamburger on top of it) can still feel competitive thanks to the different boost amounts it can take and other attributes to keep up with faster cars.

The game features 12 player online multiplayer, with two player split-screen. You can also organise private lobbies, to just race among friends, and the game has cross player across Xbox One and Series S|X. I have to admit, as there were no press sessions organised prior to release, it’s not something I’ve been able to extensively test in any way shape or form, but Milestone have plenty of experience with other multiplayer racing games, so I’m not expecting too many issues to surface.

The huge variety of tracks on offer here is staggering, and they will throw all sorts of great surprises at you. You have standard fare like boost pads, and Loop-the-loops, but then things get really adventurous with magnetic tracks that allow you to drive upside down. Gravity is always at play in races, and you want to make sure you have enough speed to really tackle that loop ahead, so you should always try to keep some boost in the tank if you can.

Then there are things like roadblocks that slow you right down, giant fans that push you to one side, accelerate and decelerate ‘strips’ that can affect your speed – even giant snake heads that will snap shut at just the wrong moment, sending you pinging off to the floor below.

They’re all set in a 6 or so HUGE environments, ranging from a College Campus, a Skate Park, a building site for a skyscraper and more. There’s even a fully-kitted out Basement, which you can edit and adjust to a surprising degree. The wallpaper, floors, arcade machines – even the posters on the wall can be edited in some fashion.

The tracks is where Milestone have more than exceeded expectations, and have built something truly special.

If You Build It, They Will Come.

Right up there with actual toy cars themselves, the other great thing about Hot Wheels was building amazing tracks on which to race them, and in the eyes of any child, it didn’t have to always be on the orange plastic track.

As I understand it, every track currently in the game was built using the same in-game toolset and track editor that they have now unleashed on to us, and oh my – it’s really powerful, and incredibly deep.

You get a quick tutorial when you first load it up, and indeed, it initially is all quite intimidating. There’s a lot of options, and you can build in any of the available environments you wish, including your customised Basement or even just a blank, empty ‘track room’.

As you play through the campaign, you’ll unlock customisation items for your basement, but more importantly, track pieces – loops, giant spiders, volcano corkscrews – with which you can flesh out your dream design. You can even use bits of the environment, with racers jumping on to the sofa, the desk or the top of a bookshelf.

Again, all of these creations can be shared online, and it’s here where I expect the game will see the most longevity. I have concerns that at present at least, there doesn’t seem to be a way to allow the best tracks to float to the top, and I’m not sure what they’ve got planned here. Either way, it’s off to solid start.

It had my son squealing with delight at the possibilities. It’s just pure imagination. That said, it is a bit unwieldly, and I imagine a lot of younger players will need to rely on us grown-ups to help out here. I guess some things never change.

As a consumer, buying a video game built on a licensed IP can be fraught with danger. More often that not, they’re often cheap, unimaginative cash-ins, presenting little value or depth.

While I have some concerns for my wallet at the unashamedly extensive DLC plans ahead, with a mixture of free and paid for items, as well as ‘Hot Wheels Passes”, containing other items and expansions – it’s hard to deny just how solid a foundation exists here.

Mattel are Milestone appear to have struck the perfect union.

Hot Wheels Unleashed is a great arcade racer. While the classic drift/boost set up with solid handling doesn’t do anything new or surprising, it doesn’t get anything wrong either.

No, it’s the rest of the game that stands out. It’s built with such care and imagination that it’s hard to race these childhood toys without a grin on your face the entire time.

After all, as a product, a toy – what is Hot Wheels all about really?

In my opinion, it’s about the crazy and fun vehicles that would never be given a chance to exist except in our heads – but just as importantly, it’s the road of our own imaginations that they drive on. Milestone concentrated on both here, and it has paid off in spades.

I was sold after 2 minutes and bought this so hard as soon as the review was over. This looks like awesome fun with my kids

jesus christ the material work in this game is unbelievably good