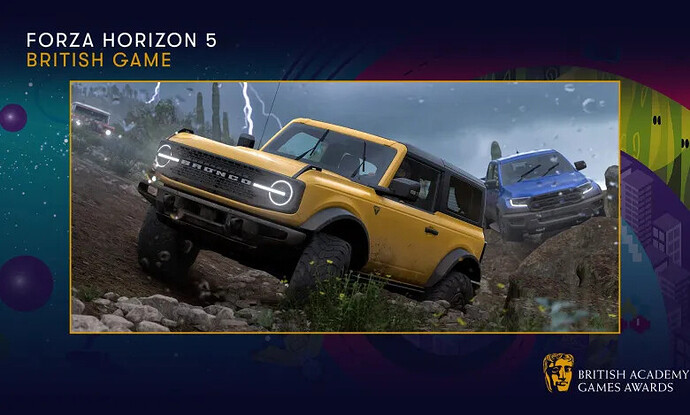 Forza Horizon 5 has won the British Game category at the BAFTA Games Awards ceremony. After a two year hiatus due to the COVID-19 pandemic, the biggest game awards event in the UK is back in London’s Southbank Centre at Queen Elizabeth Hall. The game was up against Alba: A Wildlife Tale, Death’s Door, Fights in Tight Spaces, Overboard! and Sable. There is still time for Playground Games to pick up more awards for their hugely popular racer as they are also nominated for Best Game, Technical Achievement, Multiplayer, Game Design and Family.

Forza Horizon 5 wins British Game category! The racing franchise has been nominated in every year of its release!#BAFTAGames pic.twitter.com/6en5hyfvcC

Congrats to Playground! FH4 also won British Game when it released too.

Can’t wait for Fable to follow in its footsteps!